From The Vault - Fallout Wiki
(Redirected from Mutfruit tree)
Jump to: navigation, search 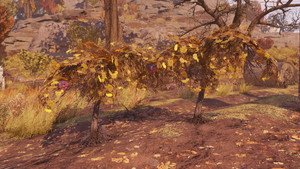 A pair of mutfruit trees in Appalachia.

Malus maattaa, commonly called the mutfruit plant, is one of the most commonly cultivated plants across the wasteland. Hardy, nutritious, and efficient, this dwarf tree yields delicious mutfruit that can be used in a variety of dishes, and even has use in medicine. Mutfruit seeds can be used for planting, but require careful management of existing stock. Some farmers simply set aside a portion of the crop for extracting seeds to replant.[1]

Vault 81 has also experimented with hybridizing mutfruit to create mutfruit that are particularly resistant to radiation, allowing for it to be consumed more safely. However, the imperfect hybridization technology has raised questions about flavor and texture of crops thus modified.[2]