Necropolis, also known as the City of the Dead, is a ghoul city upon the remains of Bakersfield, located in southern California.

This Greek word "Necropolis" (meaning "city of the dead") refers to this strangely silent ghost town. Most of the buildings are intact, but travelers report that no one seems to live there, and people who arrive to settle it either end up with radiation sickness or simply disappear. The truth of the matter involves a small population of ghouls beneath the city's streets.

Necropolis can be found six squares east and twelve squares south of Vault 13.

Constructed under the sprawling metropolis of Bakersfield, Vault 12 was billed as "built with every amenity in mind for the prospective Vault Dweller," and that it had "been fitted with the newest in Vault Water Purification Systems. Able to take even the waste located in the sewers of Bakersfield, this system is able to deliver over 15,000 gallons of pure, refreshing drinking water every day." Those who signed on for this particular Vault took their preparedness very seriously, earning the "Pressed Vault Suit" award for their efforts.[1] The Vault's true purpose, however, was to study the effects of radiation on the residents. To ensure this, Vault-Tec designed the Vault door not to close.[2]

On October 23, 2077, the populace of Bakersfield learned that the other Vaults had been sealed. In desperation, they took to their local shelter, forcing their way in to protect themselves and their families. The door worked as designed: the radiation flooded in; those whom survived suffered from ghoulifcation.[3] In the summer of 2083, the survivors would leave the shelter. Those that chose to stay[4] founded the city of Necropolis.

By the spring of 2084, Set took control of Necropolis, wresting control from the original Overseer. He, not wanting to be killed, was driven north and lost to history. For the next seventy three years, Set would lead the city unmolested from outside parties. Instead, internal political strife caused some to leave, while a much more peaceful group was forced to take shelter underground.[5] Despite Set's disgust for the group, he reluctantly sent them whatever water they needed, fearful that he wouldn't have enough people to defend the city if it ever needed to be.[6]

In February of 2162, the Vault Dweller recovered the water chip in Necropolis,[7] but Ian was killed by a super mutant and reduced to a cinder during the fight.[8][9] In March of the same year, the mutant army attacked Necropolis out of vengeance for some mutants that the Vault Dweller killed; this forced most of the ghouls to flee, and those who stayed were not spared.[10][11][12] After the mutant armies advanced, they left a truly dead city behind them. Necropolis, however, didn't became completely empty and still few ghouls lived there.[13]

The scattered survivors of Necropolis led the Great Migration across the wastes, leading to the founding of towns such as Gecko, Dayglow[14] and Broken Hills. 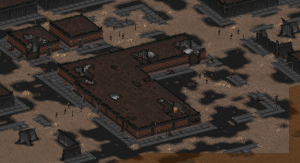 This district is the first part of Necropolis encountered by the player and is a virtual shooting gallery, filled with many hostile ghouls. They are easy experience pickings for the distance shooter. The ghouls will become hostile easily if the player tries to converse and/or rifle through their storage. There are a few manholes scattered around the area, which lead to the city's sewers, connecting this district to the others. 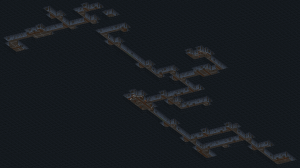 Hall of the Dead

Main article: Hall of the Dead

In a building that appears to be the remains of some sort of church, you can find a number of imprisoned glowing ones, Set, Garret, and various ghoul Guards. 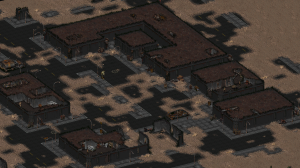 The last district, and the home to: 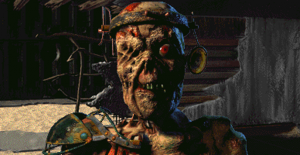 Necropolis is inhabited by a mass of ghouls, whose population is divided into three groups: