From The Vault - Fallout Wiki
(Redirected from Nellis Airforce Base)
Jump to: navigation, search

Here we have prospered and multiplied. Here our mighty guns destroy any savages that may try to harm us even before they can reach our gates!

Nellis Air Force Base is a location approximately 7.1 miles (11.4 km) northeast from New Vegas in the Mojave Wasteland. It is a pre-War air force base that once was the US Air Force Warfare Center and after the war became a home for the xenophobic Boomers, who were former occupants of Vault 34.

In 2077, during the Great War, Nellis was struck by several atomic warheads, killing all the inhabitants and leaving the base highly radioactive. Over the following decades, wastelanders all avoided Nellis by habit due to the radiation levels, leaving it an empty, desolate place.[1]

In 2231, the Boomers who had departed from Vault 34 and walked the wastes seeking a new refuge, came across the Nellis Air Force Base and settled. Their PIP-Boy Geiger counters indicated that the base was radioactive, but not dangerously so,[1] as enough time had passed. They began using the bases' remaining defensive structures and their own stockpile of heavy arms, retrieved from Area 2,[2] to keep any strangers from setting foot anywhere nearby ever since.

The Air Force Base is entirely self-sufficient, growing its own crops using water pumped from Lake Mead. In particular, basic nourishment is provided by grains and green vegetables, while protein is provided by soy and legumes.[3][4][5] Maize is also used to produce fuel in its bio-diesel refinery. Power is provided by the Nellis solar array and its generator. Boomers also receive a rudimentary education, covering farming and combat,[6] and have access to the base's medical facilities.[7]

Boomers also use pre-War VR pilot training stations to train themselves for the day when they will take to the skies.[8] This dream stems from Loyal's finding a file concerning the crashed B-29 bomber in Lake Mead, which the Boomers plan to recover... Eventually.[9]

Nellis' location is discreet and well-defended, most accessible by a cracked and cratered road littered with signs suggesting that entrance in to the area is strictly forbidden to all outsiders. The front gate is vigilantly guarded day and night. Nellis Air Force Base main entrance can be approached from two different locations, most notable via the old road leading east from Fields' Shack. Approaching from this direction you will encounter George, who provides the Courier with Nellis Artillery Timing Details. The second approach can be accessed by the unmarked Train tunnel location east of Raul's Shack. 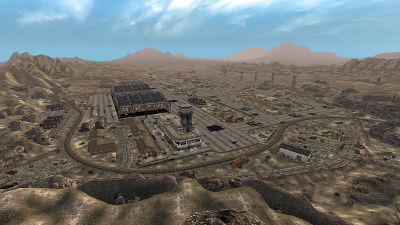 Layout of the base

Upon entrance, the most obvious structures are the control tower and hangars, to the west. Two runways run parallel to the east, occupying a majority of the bases' territory. The Boomers have made good use of the land between them, converting a parcel into an irrigated farm plot. The pipes are connected to an inaccessible shack, implying they have access to reclamation facilities. North of the farm is the Nellis Array, which provides power for the entire facility via solar panels. Along the northeast corner of the fencing is an unlootable graveyard.

One hangar houses the remaining parts of a B-29 bomber, while the other is used for social functions. The VR terminals used to train pilots, mess hall and storage are housed inside this bunker. During the day, several important members of the Boomers can be found gathered here.

Quonset huts and shacks provide living quarters, medical and educational facilities on the west side of the base. Pearl and Loyal have their own homes, while the rest of the Boomers make do with segregated barracks. Also, the Boomer Museum is located amongst the Quonset huts. Of note is a bio-diesel storage hut near the crane and tracks, giving the player a hint of what the Boomers are capable of, despite their isolation. 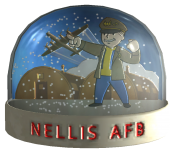 -Possible work around this bug: Sometimes the woman (Raquel) who did not come to the gate might have tried to chase after you when you fast travel. 1st time I arrived at the gate and the boomer guard told me to wait or I would get shot until someone arrived. I waited a few minutes then fast traveled to the secondary entrance point through the metro station. Finished it came out the other side. When I fast travel back to the metro entrance and entered Raquel was waiting for me inside the metro. 2nd after having fast travel out from the front gate. I fast travel back in later and Raquel was waiting right next to george. Conclusion: Raquel might be around the few last places you fast travel right after you met the boomer guard for the first time. If you went to their gate went away and came back later. Try to remember where you fast travel after getting bored of waiting at the gate, Raquel might be somewhere around the places you travel to. In two tests she was nowhere far from nellis, either at the metro or nearby George ( guy who bets with you about crossing the artillery barrage). Look for her around the destroyed town, the metro and surrounding areas. She might be there.... "might".

Nellis Air Force Base appears only in Fallout: New Vegas.