New Vegas is more than a city - it's the remedy to mankind's derailment.

New Vegas, originally known as Las Vegas[1] in the Wasteland before Robert House revived its reconstruction, is a city upon the remains of Las Vegas, located in southern Nevada.

Unlike the other major cities of the United States, Vegas emerged from the atomic fire of the Great War relatively unscathed, with most of the major damage caused by the downfall of society. Limited exposure to radioactive fallout has made New Vegas and the surrounding Mojave a very hospitable place, but the lack of any real authority besides Mr. House who only really exerts authority and protection on the Strip which means crime is rampant in most parts and communities must fend for themselves. The NCR authorities uphold the law around Vegas is also spotty at best if NCR citizens are involved, and non-existent if otherwise.

Vegas' survival is owed to the actions of Robert House. In 2065, House predicted that a nuclear exchange between the USA and China would take place within the next 15 years, and decided to put all of his resources into protecting his home city of Las Vegas.[2] He used his considerable intelligence and vast wealth to ensure that when war finally came, he would be prepared. He created an army of Securitrons, some to police the Strip, but the bulk of them hidden beneath Fortification Hill for activation at a later date. He also had his own hotel, the Lucky 38 Casino, fitted with radar-jamming systems, missile arrays, a laser defense network, and life-support systems.[2]

House calculated that his defenses would see off the majority of missiles bound for Vegas, but at least some damage to outer Vegas and the surrounding towns was unavoidable, and that more was to be done. To this end, he had engineers in Sunnyvale develop The Platinum Chip, a data storage device that would upgrade his defense systems and Securitrons to the Mark II OS, ensuring that Vegas and the surrounding area would be safe.[3]

The platinum chip was due for delivery by courier on October 23, 2077, the day of the Great War. The attack, however, came 20 hours earlier than House had predicted, and before the platinum chip could leave Sunnyvale, the city was reduced to rubble, the chip buried beneath it.[2] House was forced to make do with his relatively primitive stasis systems and although most of Vegas was saved, he suffered numerous system crashes and was eventually forced into a coma. While many citizens were spared and even began celebrating, fallout from the warheads that did hit blew into the city, killing all of them.[4] Little is known of what happened in this period of Vegas' history, although evidence of riots scar the city even today, and at least one overweight gangster similar to Don Gizmo was known to have made his mark.[1] In 2138, House awoke from his coma, but bided his time, watching the city be settled by tribals and raiders.

Arrival of the Republic

In 2274, New California Republic (NCR) scouts arrived at Hoover Dam, piquing House's interest. These were no tribals, these were civilized people - somewhere, out in the wastes, a new society had begun. A society that would no doubt see Las Vegas and its power source, the Dam, as theirs for the taking. House's Securitrons finally emerged from the Lucky 38. At first, he established contact with the raider tribes in the area and recruited volunteers for building a wall around the inner city limits to better protect it, under the watch of his Securitrons and with his stockpiles of pre-war building materials. As House considered the security of the Strip to be his highest priority, he also ordered an inner wall built to separate it from the area around the old Fremont Street, which soon became known as Freeside. With the walls completed, House offered an ultimatum to the tribes settled on the Strip: join House and be part of his New Vegas, leave the Strip, or die. Three tribes, the Boot Riders, the Slither Kin, and the Mojave's cannibals, accepted his offer, and became respectively the Chairmen, the Omertas and the White Glove Society, collectively known as The Three Families.[5] Only the Kings refused and were pushed back to Freeside. The Three Families, as well as the Securitrons, would be enough to protect the Strip for now, but if the NCR tried to take it by force they would not be able to resist in any meaningful way.[6][7]

Instead, House had members of the three families, as well as a couple of his Securitrons occupy the dam. When the main NCR forces arrived to assume control of the dam, House sent a Securitron forward to call for a parley between the NCR's leaders and himself. Eventually, they reached an agreement in the form of the Treaty of New Vegas whereby the NCR would get 95% of the Dam's power output, McCarran International Airport as a base of operation, and the permission to establish an embassy on the Strip, while the Strip gets the remaining 5% power output - much more than required to run the place - and immunity from annexation. The treaty also disallowed the NCR from denying their citizens and soldiers to visit the Strip, leading to a boom in New Vegas' economy, as tourists from all corners of the NCR, as well as stationed troopers on leave, would flock to the Strip and spend their hard earned salaries on gambling, alcohol, and prostitutes.[6][8]

Around the same time, on the other side of the Colorado River, Caesar sat his eyes on New Vegas. Feeling that the empire he was building lacked a true capital, a place he would be proud to call his Rome, he mobilized Caesar's Legion in the hopes of forcing the NCR out of the Mojave Wasteland and taking the city for himself. In 2277 this culminated in First Battle of Hoover Dam, which the Legion lost. Caesar, however, has not given up his plans of taking control of Vegas, and has waited patiently in his headquarters on Fortification Hill ever since his first defeat for an opportunity to strike again.

The future of Vegas

House has grand plans for Vegas - he calculates that on the back of tourism from the NCR, Vegas' economy will be strong enough to restart the development of new technology within 20 years, put people in orbit within 50 years, and within 100 years, have a colony ready to leave Earth behind and settle a new planet, untouched by war. And that is why he cannot let either side win. House spent over 812,545 caps hiring salvage teams to recover the platinum chip from Sunnyvale in just one year,[9] with countless more spent during other years. Having finally recovered it, House arranged for it to be transported back to him. Fearing, however, that the leader of the Chairmen, Benny, was conspiring against him and would try to steal the chip upon its arrival in the Mojave Wasteland, he had his trusted Securitron, Victor, contact the Mojave Express in Primm, to hire six couriers. Five of the couriers were going to carry various novelty items, acting as decoys for the sixth courier, who was given the chip, effectively placing the future of New Vegas in that person's hands.[10]

New Vegas is situated within a basin on the floor of the Mojave Desert, surrounded by mountain ranges on all sides, creating its arid, inhospitable climate. Settled only in the 19th century and blossoming in the 20th, the post-nuclear Vegas is a miniature of the wasteland, from the affluent New Vegas Strip, through the impoverished Freeside and North Vegas square, the vast fields of the NCR sharecropper farms, and the resourceful Westside, to the derelict South Vegas ruins, the Vegas metropolitan area spans all the misery, accomplishment, and hope the wastelands bring.

A vast network of sewers, some of which are inhabited by humans (and other creatures) run underneath the city. 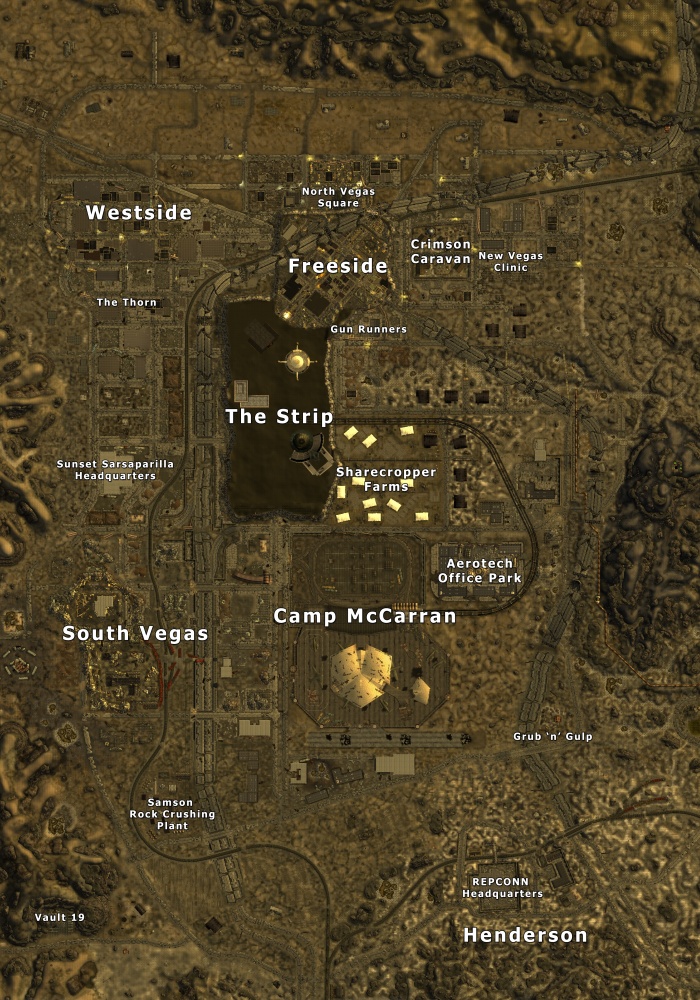 New Vegas was first mentioned as Las Vegas by Tycho in Fallout, and appears in Fallout: New Vegas.