We're the NCR Rangers – we make the world a better place.

”— Inscription on the Ranger Sequoia

New California Republic Rangers are an elite military outfit of the New California Republic. The Rangers are a volunteer special force renowned as much for their shrewd reconnaissance capabilities as their bravery and combat prowess.[1] Their primary purpose is dealing with threats regular forces can't handle, as well as keeping the borders of the NCR secure, scouting out threats and other special assignments.[2]

The Rangers were founded by Seth in the early years of the New California Republic,[3] eventually becoming an independent law enforcement agency focusing on abolishing slavery within and without the Republic. For decades they fought the practice, both in courts and on the field of battle, slowly building up their political military power. By 2241, their activism and several friends in high places ensured the passage of legislation in the core lands of the Republic south of Shady Sands, causing them to turn their eyes north, to the territories outside the capital.[4] Their limited numbers made their mission difficult, as they were routinely outnumbered by their foes. As such, the Rangers operated in secret, especially outside NCR territories. Where slavers were present, they would raid them, help potential slaves flee their would-be captors, and smuggle liberated slaves south to the Republic. Their operations were a major thorn in the side of the Slavers Guild, especially around New Reno and Klamath. Fortunately, operational security implemented by the Rangers made their cells and safehouses impossible to detect for the untrained slaver muscle.[5] Even their headquarters were secret, hidden in plain sight in Shady Sands' auto shop.[6][7] It's commonly believed that the clarity of purpose and a clear moral compass, helped them beat seemingly impossible odds and prevail.[8]

In the end, their perseverance proved essential to helping the growing republic and its still-young Army survive in a wasteland full of despots, slavers, and raiders. The Rangers steadily helped tip the balance in favor of the Republic, which stood for freedom and democracy. Their abolitionism evolved into a fundamental dedication to protecting the people of the wasteland against all forms of tyranny.[9] Their work took on a new shape in 2271, when the elder Chief Elise signed the Ranger Unification Treaty, integrating the Desert Rangers into the NCR Rangers and dedicating the Rangers to protecting Hoover Dam, New Vegas, and southern Nevada against the forces of the Legion,[10] which proved impossible for the Desert Rangers to defeat on their own.[11]

For the next ten years, the Rangers' duties slowly transformed into a permanent vigil, looking east and watching the borders against tyrants like the Legion.[12] Rangers patrolled both sides of the great Colorado River, trying to fight an enemy who refused to fight fair and routinely used children and ambushes to fight the Rangers. Many were wounded and forced to leave the Rangers, incapable of continuing their patrols. The few who recovered could count on priority assignments to elite units of the Army, always in need of capable soldiers.[13][14][15] The greatest achievement of their campaign against the legion came in 2277 when Rangers under the command of Chief Hanlon turned the tide of the First Battle of Hoover Dam. In a cunning trap laid by them and NCR's 1st Reconnaissance Battalion, they lured the best fighters of the Caesar's Legion through the Dam into Boulder City. When enemy troops entered it, the Rangers detonated the explosives placed in advance within the buildings, devastating Caesar's main force.[16]

Credited with the victory, the Rangers were celebrated across the Republic as heroes, overshadowing the sacrifice of scores of Army soldiers under the command of General Lee Oliver. The resentful General has taken it upon himself to win the next confrontation on his own terms, frequently to the detriment of the troops under his command, especially the Rangers. He does the opposite of what Chief Hanlon recommends, down to placing the Rangers in the middle of the western part of the Dam. As the Rangers lack firepower or support necessary to hold the line, they are bound to fall should the troopers start retreating from the Dam.[17]

However, their image remains unblemished. Rangers act as bodyguards of President Aaron Kimball[18] and maintain a network of Ranger outposts across the Mojave, including Ranger station Alpha, Bravo, Charlie, Delta, Echo and Foxtrot, and the gateway to the Republic, Mojave Outpost. While civilian and patrol Rangers hold the line in the Mojave and on other frontiers, acting as scalpels to destabilize enemies,[19] the veterans are occupied in Baja, chasing ghosts on the administration's orders.[20] The state of affairs has not affected the dedication of the rank and file Rangers, but weighs heavy on the mind of their present Chief, Hanlon, who believes that holding the Dam will be the death of the Republic.[21]

By 2281, they represent the elite of the NCR, and are often given dangerous or prestigious tasks, such as forming the elite bodyguard of the then President of the Republic, Aaron Kimball. However, according to Chief Hanlon, a Ranger's life boils down to the phrase "looking east", tools to be used for the territorial expansion of the Republic.[12] Regardless, a Ranger failing in their objective is a rare sight and their success is often taken for granted.[19]

A great many of them are kitted out with NCR Ranger combat armor, a symbol of their skills and bravery. They operate from six Ranger stations across the Mojave Wasteland: Ranger station Alpha, Bravo, Charlie, Delta, Echo and Foxtrot. General Lee Oliver, however, greatly favors the rank-and-file soldiers of the NCR military, to the point where Rangers are routinely put in harm's way in favor of Oliver's power-armored shock-troops.[22] 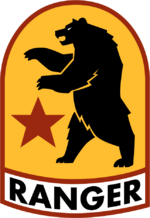 What started as an independent outfit dedicated to uprooting slavery evolved over the years into a distinct organization with the characteristics of civilian survey companies, special forces, and law enforcement: Part scout, part commando, part sheriff.[23] Although once autonomous, by 2271, the Rangers were folded into the NCR's military chain of command, operating under Army officers in any major engagements or ongoing operations of strategic locations like Mojave Outpost or Camp McCarran. However, Rangers are given leeway in terms of carrying out their duties, blurring the line between an independent agency and Army special forces.[17][24]

The Rangers are not numerous. In the Mojave Wasteland, the total number of Rangers across the region does not exceed a couple dozen, concentrated in Ranger stations.[25] The troop surge in preparation for the Second Battle of Hoover Dam increases their numbers substantially, with fifty Rangers dedicated to holding the western end alone.[17]

They are organized into Ranger battalions, which are in turn divided into companies and those into platoons and then squads. There are at least four Ranger battalions in existence, and their companies can be named after animals (eg. Cazador company.)[26][27] One of the most elite Ranger squads is the Alpha Squad.[28]

Rangers frequently serve a lifetime, until they are incapacitated, killed, or retire. Veterans who serve 20 years do not receive medals or watches, but rather the traditional Ranger Sequoia, a ceremonial hunting revolver.[29]

Like troopers of the Army, Rangers receive compensation for their work in the field. Payment is also incentive-based, and the discovery of important intel can lead to a salary raise.[30]

They are fully volunteer-only group; no persons are conscripted into the Rangers.[31] Instead, the Rangers proactively recruit members, most commonly from among the soldiers of New California Republic Army who demonstrated excellence at fighting and/or scouting, though prospective Rangers are free to refuse the offer.[32] As long as the candidate demonstrates the requisite skills, the Rangers are equal opportunity employers, hiring ghouls and super mutants on an equal basis.[33]

All candidates are expected to undergo rigorous training. 8 out of 10 drop out due to the extreme standards. Those that finish and are awarded the badge have proven that they are "quieter than a shadow and more ferocious than even a deathclaw."[23]

Before the Rangers were formalized as an agency of the Republic, the Ranger Chiefs had much greater flexibility in nominating Rangers. Those who aided the Rangers' cause in substantial ways were fast-tracked to full Ranger status, complete with their distinctive pin.[34] 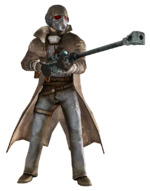 Veteran Ranger with an anti-materiel rifle

As the elite military force of the Republic, while they don't have access to power armour or energy weapons, the Rangers still have access to high-quality conventional weapons and armor. Under Chief Elise in 2241, a Ranger's default combat outfit was the second generation reinforced combat armor with a variety of advanced weapons at their disposal, including fully automatic combat shotguns, flamers and miniguns. Everything was kept at a high level of maintenance.[35] The Ranger Unification Treaty in 2271 brought changes, as the Desert Rangers merged into the Republic Rangers, bringing with them their traditional brown dusters.[36]

By 2281, the Rangers have firmly established themselves as the elite military branch of the Republic. As such, they have access to the finest armor and weapons the Republic can muster. Their regular Ranger patrol armor is hand-made in the NCR and offers good, balanced protection in combat and from the hardships of the desert, while the elite Black Armor uses advanced pre-War LAPD riot armor combined with the traditional Desert Ranger duster.[37] Ranger combat helmets are also old pre-War military gear that has built in low-light optics, allowing for more advance night scouting and sharpshooting to assist regular Army troops.[38] Ranger armories are also significantly better than that of regular troops and include anti-materiel rifles, brush guns, various automatics and more.[39]

The New California Republic Rangers appear in Fallout 2, Fallout: New Vegas and were to appear in the canceled Van Buren.