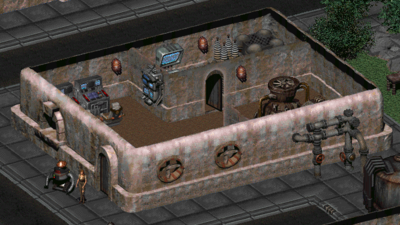 The power plant consists of two parts. The largest room is the one that is entered upon initially going inside the building. This room has machinery furthest from the door as well as storage boxes. These items and the machinery are of no importance, however. Directly to the player's left upon entering there is a cloister of computers and terminals, which may become important in doing the quest "Take care of Officer Jack" for Mira., as they are used to stop the plant exploding. The second section consists of a much smaller room with a generator and a terminal.

The New California Republic power plant appears only in Fallout 2.