The biggest little town in the world. Trashcan fires and neon signs bathe the city in a hellish glow.

New Reno is a city built upon the remains of Reno, located in western Nevada. It can be found fifteen squares east and sixteen squares south of Arroyo.

The capital of sin and prominently known for its casinos (the Shark Club and the Desperado), and total freedom with abundance of prostitutes, alcohol and drugs. New Reno is home to, among many other things, the Golden Globes studio, the Jungle Gym and the Cat's Paw brothel. There is also a substantial weapons outfiter dubbed New Reno Arms. The town in 2241 is run by four different families: the Mordinos, the Bishops, the Wrights, and the Salvatores. By 2281, all of the original families more or less retain their power with the exception of the Salvatores and Mordinos. The city is now run mostly by the Wrights, while also being contested by a new crime family, the Van Graffs.[1][2]

New Reno has no official government or police force. However, aside from their internecine conflicts, the families generally keep order and make the city safe for tourists from the wastes, sending any troublemakers who disrupt the tourist trade to Golgotha, a burial site near New Reno. The tourists are eager to partake in the gambling, prostitution, and drug usage (particularly jet, which was developed near New Reno in the Stables by boy-genius Myron) offered by the city's mobsters. Jet is distributed from family supported dealers and independent people alike such as Jagged Jimmy J.[3]

New Reno also acts as a major trading partner in the Big Circle brahmin trade, as well as being a major recipient of goods from The Den: slaves and chemicals from Vault City caravans. Ironically, it also maintains direct trade relations with Vault City, trading Redding gold ore for medical supplies.[3] However, its primary export is entertainment: most drugs and alcohol in New California come from Reno drug labs. The drug trade was dominated by the Mordino family that also controlled most of the prostitutes in New Reno around 2241,[4] while alcohol was the domain of the Wright family.[5]

Even before the Great War, Reno had already the reputation of offering all manner of vice.[6] Isolated and partially shielded by mountains, Reno survived the Great War with little structural damage during the war (though looting and property damage have taken their toll), allowing it to be reborn as New Reno.[6] By the 23rd century, New Reno was the largest populated area in Northern California. If it wasn't for the constant feuding between the four families that vie for control of the city, New Reno would have carved an empire out of the sands long ago. However, too many people and too few resources set the stage for an age-old power struggle. It left precious little room for neutrals and most Reno denizens ended up becoming a Made Man, a member of one of the families that controlled the city, just to survive.[3][6][7]

In 2241, the Mordino and Bishop families were the most influential. New Reno became a key player in the struggle for control over the territory of Northern California. The geopolitical struggle centered around the town of Redding, the primary supplier of gold ore in the region. When the Republic switched to dollars as currency, backing them with gold, the mining city became the key to the trade in the entire New California. Whomever controls the supply of gold, controls the currency. Redding was lucky enough to remain far away enough to make a military takeover uneconomic. The three powers instead decided to make the city align with one of them through agents operating in the city, either planted ones (Painless Doc Johnson from Vault City) or voluntary supporters (Marge LeBarge was for the NCR and Dan McGrew opted for Reno).[8]

The families had other plans. The Mordinos wanted to establish themselves as an independent power by controlling all trade in Northern California. Their plan involved enslaving the miners by proxy. To achieve this, they employed the young and obnoxious, but also incredibly talented chemist, Myron. In January, the first batches of Jet, a designer drug created by Myron, began to arrive in Redding as part of that plan: Control through drugs.[9] Interestingly, the Mordinos seem to have harnessed the Vault City for this endeavor, indirectly: In exchange for slaves, the Den's slaver guild would buy raw chemicals in bulk, which would then be sold to New Reno for a profit - and supporting the Mordino drug empire.[10] The Bishops opted for another path, throwing their lot in with the New California Republic. When Vault City rejected an offer to ally with them and the NCR in February,[11] the Bishops were responsible for designing a campaign of attacks designed to bully the City into the alliance beginning a month later.[12] Bishops were one of the most active families in other aspects as well: Their investment in infrastructure managed even to restore some old telephone lines too.[13][14] The Salvatores also betted on help from a strong organization from the outside, and made a top secret deal with the Enclave, giving them critical chemicals necessary to develop and manufacture FEV Curling-13 in exchange for a supply of low-grade laser weapons, which gave them a considerable advantage in firepower over the other families.[15][16][17]

The struggle was ultimately resolved following the destruction of the Enclave Oil Rig, but neither in the Salvatores nor the Mordinos' favor. Without the Enclave's backing, and the technological edge it had given them, the former did not survive for long, while the financial power of the latter suffered a critical blow with the discovery of a cure for Jet addiction, and the death of their boy genius in 2242 completely broke their strength and the family faded into obscurity over the next couple of decades, as their holdings were ceased by the other families and their members became slavers, or joined up with their rivals.[18][19][20] The Wrights and Bishops became the leading crime families, with John Bishop successfully inducting the city as a member of the New California Republic, with numerous exemptions from its laws.[21][22][23]

However, the stable situation in the city did not last. The Van Graffs expanded their business into New Reno, clashing with the Wrights. The two crime families fight for dominance over the city, as the Bishops operate in the background, aligned with the NCR. The emergence of New Vegas and The Strip in 2274, also created a lot of competition for the capital of vice.[20]

New Reno is divided into four districts, and one outside section. 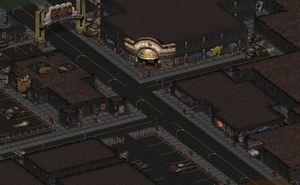 Welcome to the biggest little city in the world!
Main article: Virgin Street

Virgin Street is the entrance of New Reno with the old Reno sign, advertising "The Biggest Little City in the World". Jules stands here, giving newcomers and tourists some global information on New Reno. Interesting places include the illustrious Cat's Paw brothel and in the northern end of the street, the Desperado casino, the Mordino family headquarters. 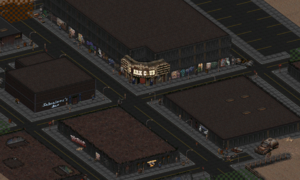 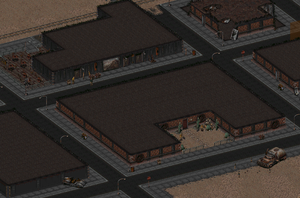 Land of the Wrights family
Main article: East Side 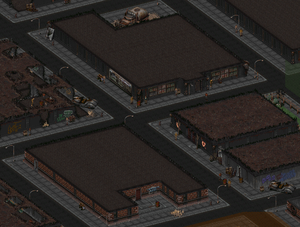 Some of what New Reno has got to offer
Main article: West Side

This district is the west part of New Reno, also known as the Commercial Row. It remains under Salvatore family protection, but due to the presence of New Reno Arms the weapons shop of New Reno, all mobsters are welcome, as long as they behave themselves. Out of it, other important location here includes the Renesco pharmacy, a drug store, and the Drunk Cupid Chapel, the chapel of Father Tully, an alcoholic priest. 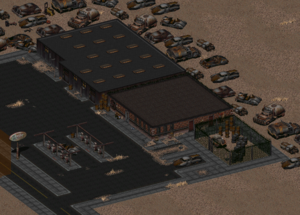 This location is only accessible once the player has acquired the Highwayman and it has been stolen while parked. It only contains the Chop shop, managed by T-Ray and work with his band of mechanics for Mr. Bishop, where they remove fuel cells and old batteries from derelict cars and sell them for profit.

New Reno appears only in Fallout 2. It is also mentioned in Fallout: New Vegas and its add-ons Honest Hearts and Lonesome Road.[25]