The people here served anyone, as long as they paid. Profligate troops, Powder Gangers, men of the Legion such as myself. The people here didn't care. It was a town of whores.

Nipton is a town located in the southern Mojave Wasteland that was ravaged by Caesar's Legion in 2281. Ranger Ghost at the Mojave Outpost reports the lack of traffic from their direction, but is equally likely to be encountered by traveling the same road to New Vegas which cuts through Nipton.

Nipton eventually became a small-time tourist destination, offering Nevada hikers and travelers a place to restock, park their RVs, and set up their tents. Those willing to test their luck could partake in the Nevada State Lottery and potentially win a jackpot worth millions of pre-War dollars, while aficionados of cinema could enjoy the nearby Mojave drive-in theater.[2] The state border between California and Nevada ran just outside the eastern exit from the small town, giving it a bit more appeal as a tourist destination.[3]

It would remain a small town even after the Great War, due wholly to Robert House's defense of Las Vegas. In the 23rd century, it gained a seedy reputation under the leadership of Mayor Joseph B. Steyn. Prostitution and thievery thrived under the dubious leadership of the one-time Hub crook. Following the NCR Correctional Facility prison break, Steyn extended a hand to the Powder Gangers letting them know Nipton was open for trade. Luckily, Steyn was able to arrange servicing NCR soldiers in the night and Powder Gangers in the day and keep the two separated.[4] The town's undoing came when Steyn arranged a deal with Caesar's Legion to turn over both NCR soldiers and Powder Gangers to Vulpes Inculta in return for 8,000 caps.[5]

Instead, Vulpes used his small Legion force to round up the residents, including the mayor. What followed was a massacre. Those who resisted were shot. Those that did not were subjected to a lottery. Using Nevada State Lotto tickets, the fate of those gathered was decided. The lucky losers were decapitated, followed by crucifixions, enslavement for third place winners, crippling for the runner-up, Boxcars, and freedom for Oliver Swanick, the sole winner.[6][7] The mayor was given a special prize: he was burned to death a pile of tires.[8] 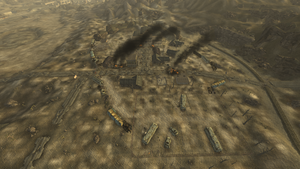 The town of Nipton, viewed from the south. The Good Luck trailer park is to the southeast, with the town hall to the north.

The town is aligned along two roads, one passing north-south from the town hall to the Good Luck trailer park, the other passing west-east from California into Nevada. The player is greeted by Oliver Swanick when they enter the town. Swanick can be seen cheering in the distance at first and will automatically engage in dialogue with the player once they come close enough.

The main road branches off towards Nipton Hall and is now lined with crucified Powder Gangers along with decapitated heads on posts and piles of trash set alight. Vulpes Inculta meets the player outside of the hall and tells them to spread the word of Caesar's Legion. After speaking to him the player is granted the quest Cold, Cold Heart. If the player is wearing NCR faction armor, Vulpes and the other legionaries will be hostile and attack on sight.

Some companions will comment on the crucified townsfolk. Cass, for example, will ask, "Should we cut the people down?" However, the people nailed to the crosses are on the verge of death can cannot be cut down through any means. A bullet is the only way to help them (and will not cause any loss of karma or negative reputation).

Opposite the Nipton general store