Novac? Nice enough place, I guess, but just between you and me, when I rolled into town, my skin started to itch. Watch yourself.

Novac is a town in the Mojave Wasteland in Fallout: New Vegas.

Established alongside Highway 95 before the Great War, the town of Novac was once just a small, nameless stopover point for travelers looking for a restroom, a motel, or a coolant refill, particularly on the way to the REPCONN test site. Dinky the Dinosaur and the "World's 2nd Largest Thermometer" were novelty roadside attractions, to help attract customers.[1] After the war wiped the slate clean, the settlement was abandoned for the better part of two centuries, until it gained a new lease on life in the first half of the 23rd century, around the 2230s-2240s.[2]

The settlers gradually cleaned up and restored the area. The fledgling town was named after the neon sign advertising the motel. Of the name, arrow, and the No Vacancies sign, only the arrow and No Vac remained. Though it lacked access to natural resources, its proximity to the REPCONN test site and the seemingly inexhaustible supply of salvage allowed the town to generate a stable supply of pre-War technology, scrap, and other goods to caravans passing up and down the highway. The arrival of the Bright Brotherhood around 2281 and the feral ghouls that blocked the road to REPCONN facilities have caused concern that this might threaten the town's livelihood.[3][4] However, the recent increase in caravan traffic up Highway 95 has given the town an additional source of income, due to the virtual shutdown of I-15. In fact, some denizens expect Novac to become Nevada's next boom town.[2]

However prosperous it might be in the future, Novac's denizens aren't too trusting of transients and non-residents in the present. This is due to the proximity to the front lines along the Colorado and Legion and other raiders skulking in the south-eastern Mojave, particularly after the loss of Nelson and Camp Searchlight. Although not a territory of the Republic, the NCR Army extends its protection to the town as a vital stopover point for caravans.[1] Permanent protection is provided by two NCR Army veterans, Craig Boone and Manny Vargas, who use the giant Tyrannosaurus Rex statue as a watchtower to eliminate any would-be troublemakers at range. The only other potential law in the town, Ranger Andy, is a retiree who recently hurt his leg falling down the stairs in the motel.[1] 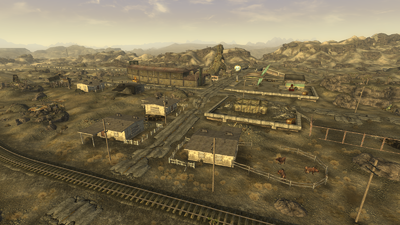 The layout of Novac

Novac occupies a crossroads on the western side of a major Highway 95 interchange, leading east towards Nelson and west towards the REPCONN test site. The west side contains the residential houses, including Jeannie May Crawford's house, the McBride house, and two more Novac houses. There's also a small water tower with a swampy, irradiated area to the northwest, No-bark's shack by the road exiting north, and a mess tent set up just across the street from the Poseidon Energy station by the motel.

The Dino Dee-lite Motel is the centerpiece of the area, featuring three accessible bungalows (Ranger Andy's bungalow and Cliff Briscoe's bungalow) and seven accessible rooms, including Boone's room and Manny Vargas' room. One can be purchased from Jeannie May Crawford at the Dino Dee-lite front desk for 100 caps or received for free as a reward for reaching the Accepted reputation in the town. Of course, there's also Dinky the T-Rex, which contains the Dino-Bite Gift Shop, ran by Cliff Briscoe, and the town's watchtower up the stairs.