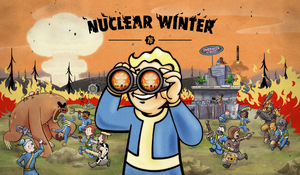 Nuclear Winter is a 52-player Player vs. Player (PvP) Battle Royale mode for Fallout 76. Nukes have set the world ablaze and the battle to claim the spot as Overseer of Vault 51 has begun – which player will be the last one standing or be consumed by the ring of fire?

The mode allows players to rank up, unlock exclusive perks, and build up their CAMP to weather the storm, while scavenging for weapons, supplies, and nukes to take on other players and creatures and earn unique cosmetic rewards.

For loading hints, see here. You may also wish to peruse our perk coverage, armor sets, weapons, consumables, and the Nuclear Winter map.