From The Vault - Fallout Wiki
(Redirected from Nuka World)
Jump to: navigation, search

Nuka-World was the largest amusement park maintained by the Nuka-Cola Corporation and is the setting of the Fallout 4 add-on Nuka-World. The setting is inspired by a number of amusement parks, however geographically it is set in Springfield, Massachusetts roughly the same location as the real world Six Flags New England.[1]

The idea for Nuka-World was born on a Memorial Day weekend as John-Caleb Bradberton watched hundreds of American's enjoying an ice cold Nuka-Cola at the fairgrounds. He thought, "A day like this should be everyday!" and the idea for Nuka-World was born. Construction was started in July 2049, and despite everyone's doubts, opened less than a year later on May 1, 2050. Nuka-World featured Nuka-Town U.S.A. and Kiddie Kingdom as its two main attractions. Nuka-World's opening day saw tremendous success with over 40,000 tickets sold. Due to the overwhelming success, the plans to expand Nuka-World were immediately set in motion. Dry Rock Gulch opened in 2058, followed by Safari Adventure in 2067. On both occasions, the number of visitors almost doubled overnight. The Galactic Zone, the last and most ambitious of the planned parks, opened to the public in 2072.[2]

It wasn't long after opening that John-Caleb Bradberton realized he wanted to share the joy of making Nuka-Cola with his audience. The local bottling plant was remodeled and updated to allow for guided tours and sampling. On the eve of the Great War, the featured drink was Nuka-Cola Quantum. Together with Kiddie Kingdom and Nuka-Town, it formed the nucleus of the park.[3] Kiddie Kingdom was the original featured park of Nuka-World. Famous for its sugary dessert theme, John-Caleb Bradberton wanted to focus on a place for younger children to enjoy. Some of Kiddie Kingdom's more popular attractions include the Ferris Wheel, King Cola's Castle, Nuka Racers and the Fun House.[2][4]

Safari Adventure was the largest undertaking by John-Caleb Bradberton. It took a grand total of seven years to build thanks to the valuable input from a variety of zoological and environmental scientists. It opened its gates during the Labor Day weekend of 2067, 9 years after Dry Rock Gulch. Popular attractions at Safari Adventure included Cappy's Treehouse, the Primate House, and the Reptile House. Another ride, the Angry Anaconda Rollercoaster, was scheduled for opening in 2078.[2][6]

As the shining pinnacle of Nuka-World, John-Caleb Bradberton's final inspiration was to bring his customers a taste of the future with the Galactic Zone. Opening at the start of the season in 2072, it set records as the most popular attraction in Nuka-World to date. The Galactic Zone contained a unique collaboration between the Nuka-Cola Corporation, Vault-Tec, and RobCo Industries, allowing visitors to go on a space adventure at Nuka-Galaxy, prepare for the future at Vault-Tec's Among the Stars, and finally, experience RobCo's achievements in robot technology at the RobCo Battlezone.[2][7]

Abandoned after the Great War, Nuka-World's size and defensibility of each location eventually attracted wastelanders who made it their home. The town prospered as a trading hub for years, but unfortunately, it also attracted an unsavory crew. In 2286, three raider gangs (The Pack, Operators, and Disciples) invaded the city under the lead of Overboss Colter. Killing the defenders and enslaving the remainder, they instituted a brutal reign of terror. Nuka-World was to become their fortress and the heart of an empire.[8] Fortunately for the wasteland, Colter grew comfortable in his position as Overboss and was content to tinker with his power armor, while the situation deteriorated.[9] Faced with dissolution of the park and the raider empire, Porter Gage orchestrated Colter's fall in the Gauntlet, to replace him with the Sole Survivor.[10] 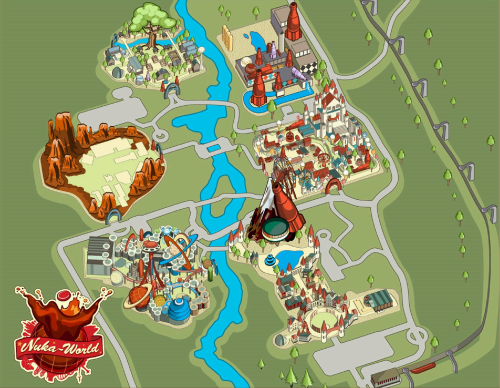 Nuka-Town USA lies on the south end of the park, and hosts the three raider gang headquarters as well as the Overboss's personal quarters at the Fizztop Grille. Going counter-clockwise from the northern tip of Nuka-Town USA, there is Kiddie Kingdom, the World of Refreshment, Safari Adventure, Dry Rock Gulch, and the Galactic Zone. A river separates the former three from the latter three and bridges facilitates navigation.

There are many more locales to Nuka-World than just those in the parks; several homesteads dot the map, as well as a power plant in the west, a junkyard to the southwest, the company town of Bradberton and a reservoir to the north, and even a museum about shovels in the southeast.

Nuka-World appears only in the Fallout 4 add-on Nuka-World.