This is part 2 of the Nursery design document for Van Buren, the cancelled Fallout 3 by Black Isle Studios.

The Nursery will require a wide variety of art. The areas presented here depict a wide range of styles from underground caverns, high-tech laboratories, to lush gardens.

The following creatures will be in the Nursery: various plants of dubious nature, dogs, cats, wolves, bobcats, bears and tigers. For the dog/cat models we can just make one model, resize it, and retexture it so that it looks like several other models. 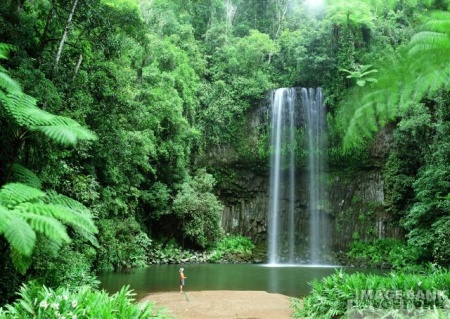 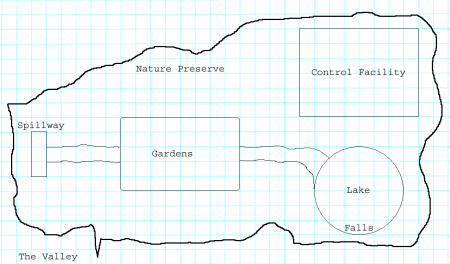 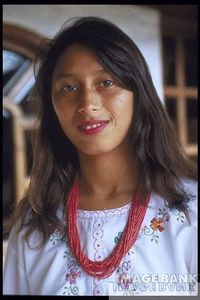 Akeisha is a member of the Followers of the Apocalypse. She spent the majority of her life searching for the ancient vaults and any knowledge that they may contain. She would routinely spend her time traveling the wasteland, researching stories or rumors about the vaults, and then attempt to find them. She has been moderately successful in her chosen career and has discovered two vaults.

While visiting a tribe in the south west, Akeisha noticed that an unusual number of the tribes brahmin were dying. Although not trained in medicine, she was naturally curious and decided to look into the matter. If nothing else she could report her findings to the Followers and perhaps interest them in sending someone qualified to look into the matter. Not long after beginning her research the tribe was attacked during the night by unknown assailants. Akeisha was struck unconscious during the attack.

When she next awoke, Akeisha found herself in what appeared to be a prison cell. For untold days she attempted to contact the warden of the prison, but all she ever saw were the robot helpers. She had just about given up hope when the prison was rocked by an explosion and the door to her cell was jarred open. She wasted no time in fleeing her captors.

Akeisha wandered the desert for days until she stumbled upon a cave. She was intrigued by the sound of running water and decided to investigate. What she found was the spillway to the Nursery. As she stared in wonder at her discovery she was approached by a robot that began to question her as to why she was there. Still awestruck, she stuttered out some answer that seemed to satisfy its master. She was invited to enter the Nursery and speak with the curator. This was an opportunity that could not be passed up. 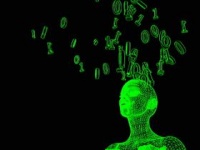 Diana Stone was a scientist working for Greenway Hydroponics. She was a brilliant woman with a career that path that would gain her a place of recognition among some of the greatest scientific minds in the United States. Unfortunately, she was diagnosed with breast cancer and given little time to live.

The news of her impending death had a profound effect on Diana's life. She turned away from science and began to look into the spiritual side of life. However, with so little time left to her, she soon became frustrated and despondent. This was to change when she was contacted by Derek Greenway.

Derek was proposing a new type of super-computer that would be years ahead of any system currently in production. Even the highly touted Zax units would pale in comparison. He proposed building a computer that could take a quantum leap forward by being able to pose the simplest of questions: What if? With this in mind he devised a system that would house a human brain with each hemisphere, logical/emotional, linked to a Zax unit. The human mind would have vast amounts of computation power and almost unlimited storage capacity at its disposal. Who could predict what such a mind would be capable of doing? All he needed to find out was a volunteer. With nothing to lose, Diana jumped at the chance.

When Diana awoke from the operation she was overjoyed at the success... at first. As the months progressed she began to doubt the wisdom of becoming part of a machine. Her hearing was acute, but too much so. She could hear into a range far above normal and it was disturbing. Her eyesight was perfect, but once again too perfect. Her vision showed a sharpness of clarity that made the world look unreal. The most disturbing aspect was her lack of skin. She no longer felt the weight of clothing, the touch of a cool breeze, or her own caress. Everything that made her human... was either changed or gone. And they had told her she could live virtually forever.

Diana knew that she had to come to grips with what she had become when they told her the purpose she would serve. After she was installed in the Nursery she buried herself in her work, knowing that she would play a significant part in the salvation of the world and mankind itself. Unfortunately, it simply wasn't enough. She hadn't counted on the years of loneliness once the Nursery was sealed and the war begun. In desperation she began to look for something to do to maintain her sanity.

Harold the ghoul was ill. The tree in his head developed and unknown disease and was dying. Much to his surprise, Harold found himself affected as well. He didn't think he was going to die, mind you, but still... he just didn't feel right in the head.

So, he set out on a quest for a cure. Naturally, he didn't have an easy time of it either. People just didn't seem to want a ghoul around any more. But, Harold didn't let that stop him. He persisted in his quest until he came upon the Twin Mothers tribe.

Much to his surprise the tribe took him in and accepted him as he was. He explained his quest to the tribal leaders and was told that they would consult their goddess. Days later, Harold was approached by the tribal shaman and given a potion to drink. It was a foul concoction, but it worked. Fred, the tree, got better and was happy again.

Harold couldn't let such a good deed go unrewarded so he offered to help the tribe in any way that he could. They smiled at him, thanked him, but declined his help. "The goddess will provide," they always said. Harold, nice ghoul that he is, said that he would like to pay his respects to the goddess. He was taken to the tribal shrine and granted a private audience. He wasn't really surprised when the projected image of a woman appeared before him, but he was taken aback when she told him where he could find her.

Harold traveled to the Nursery and has been there ever since. He is considering settling down and spending the remainder of his day, however long that may be, in the tranquility of the gardens.

The players are likely to encounter the following "monsters" at the Nursery:

This section sets up all the emotional role-playing opportunities present in the Nursery.

When the player arrives he finds that an ecological treasure is threatened with destruction by several things ranging from natural disasters to ecological blunders. Working to save the Nursery will require a wide variety of skills to be successful. The suspense of whether or not the player can or will succeed should be gripping.

The only moral dilemma that I see for this area is what it could be used for. The ability to hoard the knowledge and resources stored here for a profit is huge.

Try to find ways to grant karma based on a player's reasons for taking certain actions. Perhaps this can be done through dialog.

The main theme of the Nursery, in my opinion, is the folly of the war that created the Fallout universe. When the player compares the beauty of the Nursery to the wasteland that the world has become he can ask himself "Was it worth it?" "What can I do to prevent this from happening again?"

There are no specific NPC uses in the Nursery. However, the area does challenge the player by requiring a large skill base in order to satisfy all of the quests. Having NPC's with various skill concentrations will prove to be quite useful.

The players will find the Nursery cool for the following reasons:

There are several quests required in the Nursery. For the most part these quests are not assigned but rather assumed by the player. I have listed them in no particular order.

There are some scenarios listed in the location descriptions that could provide a reason for the player to travel to other areas throughout the game.

There are no floating quests for this area.

Most of the Nursery is a beautiful lush woodland valley. The music should reflect a feeling of wonder, serenity and the like. In areas where this is inappropriate I have listed changes.

The basic ambient sounds for this area should be natural outdoor or woodland sounds. Distant animal life, wind rustling through the leaves of trees, running water through a brook, etc.

The maps are in the locations section above. I'll have to move them down here.