The innocent creatures are drawn here by His gifts. They come from across the Wasteland to live in this sanctuary. This part of the world is healing, my friend, and it's all thanks to Him.

Oasis is an unique vale in the northern Capital Wasteland, to the north-west of clifftop shacks.

What is known as the Oasis was once just one of many mines scattered across the landscape of the United States. The extensive network of caves beneath it was used as impromptu shelter by the inhabitants of a nearby mining town from the bombs. As the time passed, the sheltered rocky vale was stripped of mining equipment and other installations, with only a handful of artifacts surviving to the 23rd century.[1]

Sheltered by the rock formations in the northern Capital Wasteland, it gained a new lease on life in the 2240s or 50s when Harold found himself overwhelmed by Bob in his travels and laid down roots in this area[2] in what the Treeminders call the Harvest Month (when Bob's seed pods ripen and disperse their seeds, resulting in the creation of new trees, grass, and plants).[3]

With Harold's mutation progressing further he became the unwilling heart of an oasis in the desolate wastelands.[4][5] Around 2257, a small cult formed under Birch, dedicated to the worship of Harold. Birch saw in Harold not an unfortunate mutant condemned to live out his life as a tree, never again to resume his wasteland travels, but a god. The cult, the Treeminders, were to be his last line of defense.[6]

The Treeminders shun technology in favor of nature, blaming technological progress for all human misery.[7] The control over the cult, exercised by Tree Father and Leaf Mother (Birch and Laurel), with equal say in its affairs.[8] As the Oasis grew and nature once again reappeared in the wasteland, the cult confronted the hostility of the wasteland. Although they disdained technology, the Treeminders continued to use firearms, to remain on equal footing with their enemies.[9] Only select outsiders were permitted to live long enough to enter the Oasis, though it was rare. Most are turned away, some are killed when they try to gain entry by force, and others are shot on sight, like raiders.[10]

The Lone Wanderer in 2277 is the first one in years to visit the vale.[11] The Oasis is one of the most fertile places in the wasteland, filled with lush vegetation, trees, and even birds and squirrels living within the sheltered forest.[12] No other place in the Capital Wasteland is so teeming with life,[13][14] although there are locations far from the Capital Wasteland, including Zion Canyon and Jacobstown, that have comparable amounts of plant and animal life.

The Oasis is located inside a large rock formation in the north of the Wasteland. The gate to enter it is accessed via a narrow passage in its western face. 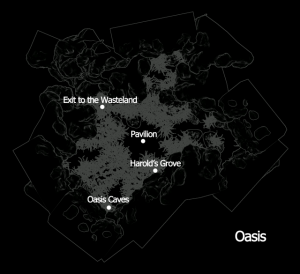 The Oasis itself is a small vale located inside the rock formation. It's a small area, centered around a makeshift pavilion with the basin of purification. Scattered inside alcoves created by the rocks and trees are resting places for the Treeminders.

The grove where Harold rests is a small area centered around him.[15]

Accessible only with the key from Cypress, the caves are straightforward, though infested with Mirelurks and their variants.</ref>[16] 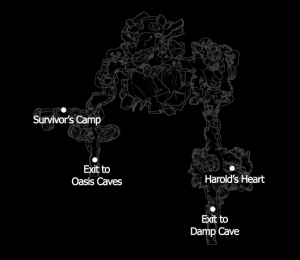 The lowest level of the caves below the Oasis is partially flooded. It also contains a survivor camp with the remains of a Great War survivor and contain a plethora of "nifty gizmos".[17][18] Of course, Harold's heart is also in these chambers. 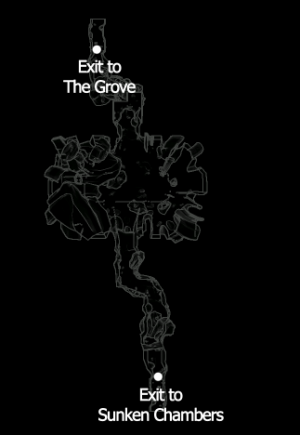 The damp cave is a single, large chamber with several mirelurks, some minor loot, and a direct exit to Harold's grove.

Oasis appears only in Fallout 3.