Operation: Anchorage. Enter a military simulation and fight in one of the greatest battles of the Fallout universe – the liberation of Anchorage, Alaska from its Chinese Communist invaders. Gain access to unique armor, weapons, and exotic gadgets while you build and command interactive Strike Teams to win the battle and defeat the Chinese base.

Operation: Anchorage is the first add-on for Fallout 3, developed and published by Bethesda Softworks.

Operation: Anchorage was initially released exclusively as downloadable content on Xbox Live and Games for Windows Live on January 27, 2009. It was made available for PlayStation Store on October 1, 2009. For Xbox 360, download codes for Xbox Live are also available in retail.

For PC and Xbox 360, Operation: Anchorage is available as a disc version as part of the first Fallout 3 Game Add-on Pack, released on May 26, 2009. The pack also includes The Pitt as well as a Vault Boy poster.

Like all add-ons, Operation: Anchorage is included in the Fallout 3: Game of the Year Edition, released on October 13, 2009 for all platforms.

For Steam users, Operation: Anchorage, along with all the other Fallout 3 add-ons, is available, released on July 16, 2010. 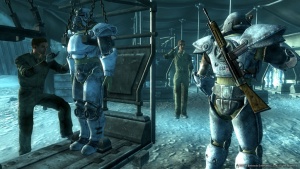 Technicians and a American T-51b unit in T-51b power armor.

In this add-on, the Brotherhood Outcasts are attempting to access the alleged pre-War technology cache in the Virtual Strategic Solutions, Inc. vault. However, the way to enter the vault containing these relics is by completing a military virtual reality simulation. None of the Outcasts have the correct computer interface (like a Pip-Boy 3000) to enter the simulation, so it comes down to the Lone Wanderer to go inside and complete a simulation of the greatest battles of the Sino-American War: the liberation of Anchorage, Alaska from occupying Red Chinese troops. The simulation is set during the Anchorage campaign, which occurred between June 2076, when the T-51b power armor was first introduced, and January 2077, when Chinese forces were completely driven out of Alaska.

Once the add-on is downloaded, the quest objective for Operation: Anchorage will be activated by a radio broadcast stating, "This is Defender Morrill. Any Outcasts listening on this frequency report to sector 7-B, Bailey's Crossroads. This is a high-priority message; backup is needed at our location. Any personnel listening on this frequency, please report at once." A marker will appear on the world map near the Red Racer factory.

In the simulation, the player is stripped of any equipment and weapons (excluding quest items) and forced to utilize the resources supplied throughout the simulation's environment. The People's Liberation Army is everywhere, and the player first has to secure the surrounding mountainside and then fight their way into the Chinese base. The player has to use a lot of their standard combat skills, along with several new tools that are only available in the add-on. These include interactive strike teams under the player's command as well as unique armor, weapons, and other exotic gadgets. Pieces of enemy intel that the player can collect are also hidden throughout the simulation. 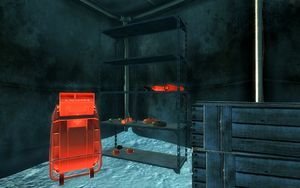 The player is also introduced to a new healing system in the simulation: rather than stimpaks, there are health dispensers that will completely replenish one's health. ammo dispensers can also be found in many places. Corpses cannot be looted, however; all bodies disappear in a blue-static animation a few seconds after death. You are also unable to pick up clutter or open containers; you can only interact with objects that are blinking red and emitting a humming noise. After exiting the simulation, you are allowed into the armory and can grab anything you want.

The add-on can be played at any time after the player exits Vault 101 at the beginning of the game. After completing the simulation, the Lone Wanderer is able to unlock the armory via the terminal and take all of its contents. They also receive Power Armor Training.

Accessible outside the simulation

Items which do not appear outside the simulation without the use of exploits or console commands:

If you don't already have it, after completing and exiting the simulation you will receive the Power Armor Training perk.