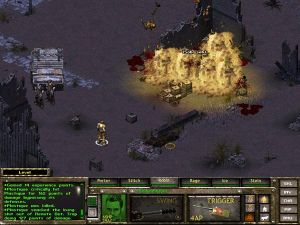 Brand new engine. From scratch. All new art, all new programming (well, except the Special system, which came from FO2 and has been tweaked). It also supports 1024x768.

Phoenix engine in an isometric 2D game engine created by Micro Forté and used for Fallout Tactics. The updated version of the engine was also intended to be used for canceled Fallout Tactics 2.

In May 1999, John De Margheriti, CEO of Micro Forté, visited Interplay with a pitch for an isometric scrolling shooter called Chimera (a.k.a. Chimera Project). Interplay was impressed with the quality of the demo, but was not interested in the game itself. However Brian Christian, the head of 14 Degrees East, saw enough potential in Chimera engine to propose the idea of doing a tactical combat game set in Black Isle's postapocalyptic Fallout world.[1][2]

The large part of Chimera engine was rewritten on the fly during Fallout Tactics development.[3] Some tables and algorithms for the combat came from studying source code of original Fallout and Fallout 2. Still, the main part, including game mechanics and render, was written by Micro Forté for the sole purpose of Fallout Tactics.[4] So the new engine emerged - Phoenix. 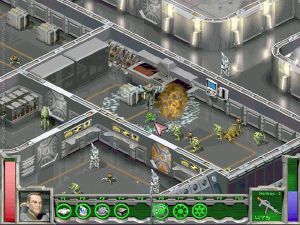 Phoenix engine is written entirely in C++.[4] It uses a three quarters perspective with 2D tile-based backgrounds to represent a 3D environment. Phoenix engine provides multi-storey buildings support which allow characters to climb on top of buildings, up stairs and ladders, or plumb into subways and subterranean caverns, within a single game map.

Unlike Quake engine Phoenix engine wasn't designed to be modifiable. No Gameplay API and a corresponding SDK were created. To modify gameplay it's necessary to edit the source code which isn't as modular in design as it needs to be to allow easy game modding.[3] Therefore, the engine was designed for Micro Forté's internal use only.