The history of the photo camera as a concept dates back to 5th century BCE and a chinese philosopher by the name of Mozi, who proposed the camera obscura as a means to capture still images. However, as a technology it's younger by a good twenty-three centuries, as it was only in the beginning of the 19th century. It was in 1825 that Joseph Nicéphore Niépce finally managed to create the first permanent photographs after nearly half a century of attempts by various chemists. The technology was one of several revolutions that fundamentally changed civilization, especially journalism and law enforcement. Although technologies evolved over the next 250 years, allowing for higher resolutions, more vibrant colors, and better preservation of images both analog and digital, the fundamental principle remained the same. Even with the advent of holography, photography still had its place and retro-styled cameras were the basic tool of journalists the world over, creating iconic images in moments. In one notable instance, a photograph of posing U.S. soldiers taken in the days preceding the liberation of Anchorage was used as basis for the Anchorage War Memorial.[1] 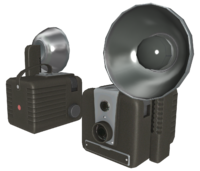 An inexpensive, no-name twin-lens reflex camera designed for ease of use, this particular model was manufactured without a tripod mount or a viewfinder, built to allow users to literally point and shoot pictures. The dual lenses on the front (one for actual picture-taking, the other for would feed everything into the internal camera, safely protected by a rugged metal casing - prone to rusting if not kept well-maintained - and with the exposure number prominently displayed on the back. The mounted flash allowed for frictionless picture taking, although the absence of a mount required a steady hand. Users could also set the desired exposure and other features using two buttons on the front part of the camera. A simple leather strap was provided for convenience.[2]

For damaged versions, see: pages for Fallout 4 and Fallout 76 cameras. 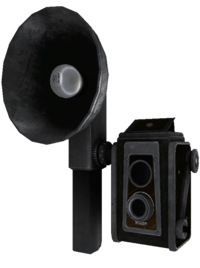 A more refined twin lens reflex camera manufactured by Codac, using a conventional camera film. The combination of the rangefinder and a high-resolution lens allow for taking incredibly lifelike color pictures with minimal skill.[3] Codac actually manufactured two types of the R9000, one without the focusing screen on top, with an integrated flash, designed for automatic picture taking, and a Deluxe version that was a genuine twin lens reflex camera, which enabled detailed picture taking and aimed at professionals.[4]

A version of the flash camera manufactured using more expensive materials, including chrome, and a top-mounted viewfinder, the ProSnap was altogether a more expensive, more refined model that nonetheless still lacked a tripod mount for taking better pictures.[5]

A powerful compact rangefinder camera, the ProSnap Deluxe was manufactured for the discerning photographer, capable of accepting a variety of lenses for use in the field. These included 105mm and 200mm lenses, as well as ones offering more specialized functionality: Night vision and targeting lenses. A special feature of the ProSnap is telling the user of subjects in frame, from objects, to locations, and even animals or people.[6]