RobCo Industries PIP-Boy 2000 is a pre-War personal information processor from RobCo's Pip-Boy line of products, designed to provide its users with a powerful tool for organizing their life, keeping track of activities, storing data, travelling, and much, much more. Though not as advanced as later models, it remains a rare, powerful tool in the post-nuclear United States.

Small by pre-War standards, the PIP-Boy 2000 is a cumbersome wrist-mounted device (

with hand-held options available), utilizing modern cathode ray tube monitors in green monochrome for high resolution display of its contents. The versatility and ruggedness of the design won RobCo a contract for supplying PIP devices to all Vault-Tec Industries shelter personnel and designated dwellers.[1][2]

Another key factor was the fact that the hardware and software of the PIP-Boy allows for dozens of functions. These include tracking the current status of the owner on any assignments they might be carrying out, generating automatic maps of the local area

using a simple, elegant form of sonar, and satellite imaging (where available) to call up

entire map blocks of hundreds of square miles,[3][4] recording audio and video for later playback,[1] keeping track of important dates and events (excellent for scheduling meetings and appointments), and more.[5] While commercial models had the Alarm Clock offered as an optional feature, all PIP-Boys manufactured for Vault-Tec had it included as standard.[6] Other features include cabling for external Wattz C-U motion sensors, a holodisk reader,[7] and

a buddy chat program and the ability to play simple games.[4] Additional peripherals compatible with the PIP-Boy 2000 include the answer console[8] and memory enhancers designed to transfer information through an optic flash to the user's brain. These range from dictionaries and encyclopedias to more exotic lingual and medical enhancers.[9]

Of course, managing the multitude of function screens and hardware extensions was cumbersome and reduced reliability. As a result, PIP-Boys required (still do) regular maintenance to remain in working order.[1] Tellingly, RobCo issued PIP-Boys with just a three month warranty.[5] Annual maintenance allowed Vaults to retain their PIP-Boys in good condition, but when left for extended time periods without maintenance, data contained in the PIP-Boy's memory could become corrupt,[11] to the point of being reset to factory zero.[12] Many Vaults that were furnished in later stages of the project (even if their construction ended early) opted for more modern models of the PIP-Boy product line, even if they were not compatible with hardware designed for the older models.[13] However, despite these flaws, functioning PIP-Boy 2000 units remain highly sought after due to their utility and functionality.[2]

The PIP-Boy 2000 is divided into several function screens that allow the owner to utilize its different functions. In game terms, the PIP-Boy 2000 is simply the interface the player uses to interact with the game. 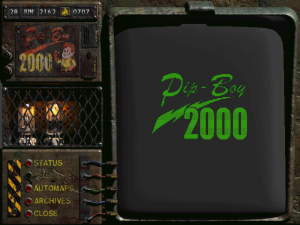 The main PIP-Boy screen is accessed through the PIP button on the main interface tab. It offers access to: 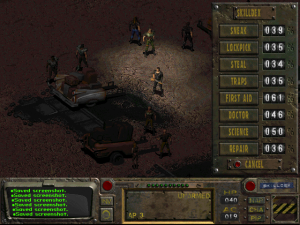 The interface bar, with the Skill Dex visible.

The interface bar is the main part of the gameplay and contain buttons that allow the player to access all the necessary functions (including the inventory screen, options, PIP-Boy, character screen, map, and the Skill Dex). The Skill Dex is a panel that allows the player quick access to the eight active skills that require a target to use. The left hand of the bar is occupied by the description window, which displays information about damage, skill use success, as well as providing flavor text.

The inventory screen is activated through the INV button. The largest monitor is a multiple function display, giving an overview of the character's statistics and equipment at a glance. When items are examined, it display's the description and name of the item. It also includes a rotating display of the character, a listing of the items in the backpack, as well as slots for the armor and active items.

The MAP button opens the local map. If the motion sensor is in one of the active slots, it is considered plugged into the PIP-Boy and can be used to display all the living characters on the local map. The same is achieved if it's used from the inventory screen. Note: Only motion sensors in the active item slot can be activated from the map screen, otherwise it will display a message that the option is not installed. 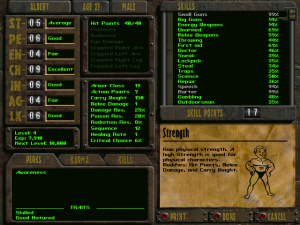 An integral part of the PIP-Boy is the character screen containing the owner's Vault-Tec personnel record[14], offering a summary of the owner's abilities, including attributes, derived statistics, skills, traits, and any injuries sustained. It also allows the owner to keep track of their reputation in the wasteland (both global and local), as well as listing the precise number of creatures and characters they dispatched. 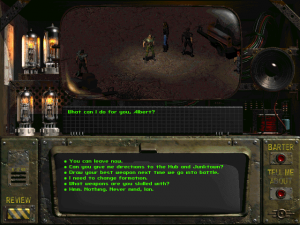 The dialogue mode, with a local named Ian.

The dialogue screen peripheral is a comprehensive solution that tracks conversations with other characters, enables reviewing the conversation, and facilitates trade. 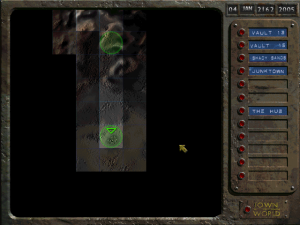 The world map screen differs from the automatically generated local map in that it relies on a pre-installed map. Corrupted archives will typically cause a fog of war effect to take place, where most of the map will be obscured until discovered by the player.

In Fallout, the map will also log through where the player has travelled, reset in between stops.

The Eastern Brotherhood has acquired a number of PIP-Boy 2000 units and modified them for squad leader use. This Brotherhood Edition is distinguished by the B.E. letters bolted onto the main screen and has been fitted with several upgrades, including a modified interface bar integrated with the map screen (updated in real time), the ability to store personal data and statistics for six squad members, an expanded inventory screen that allows for sorting items in two columns, rather than one, as well as displaying maps in full color. Additional peripherals have also been implemented for managing squads.

Curiously, the date and time option, as well as the Alarm Clock function have been damaged in the upgrade process, at least on the main PIP-Boy screen, but function normally on the world map view.

PIP-Boy 2000 can also be modified with expansion hardware. Data tubes (advanced, jam-packed vacuum tubes) can be connected to expansion slots (the 2000 hand-held has six, while the wrist-mounted model can only take four)[15] to provide additional benefits for the user. These include:

A developmental version of the Pip-Boy 2000, mounted on the forearm and representing a step forward in the development of more ergonomic versions of RobCo's flagship personal computing product. The Mark VI was given to the Residents of Vault 76 who would repopulate Appalachia 25 years after the Great War. Unlike previous versions of the Pip-Boy 2000, the Mark VI is without a real-time mapping feature.[16] But makes up for the lack of mapping with additional features that would be common in future Pip-Boy models like user status tracking, an FM radio upgrade module,[17] Geiger Counter, an advanced compass that could display notable locations and nearby persons and creatures, lighting functionality for dark areas, and inventory management.