From The Vault - Fallout Wiki
(Redirected from PipBoy)
Jump to: navigation, search
...

The RobCo Pip-Boy is the ultimate in personal computing devices.

Using ultra-modern, super-deluxe resolution graphics in conjunction with its capability to store and transfer large amounts of information makes it the obvious choice for the wandering explorer, whether it be the out-on-his-own newbie or the all-around survivalist expert.

Pip-Boys were standard equipment issued to all Vault-Tec Corporation vaults.[1] To register for such a device, residents would take part in an orientation seminar given by the Vault's Overseer to explain the functions and daily life enhancements provided by the Pip-Boy, along with filling out personal information in the Personal Information Processor Responsibility Form regarding such things as hand dominance, personal preferences, arm circumference, and Vault jumpsuit measurements.[2] Some Vaults received newer models of the device, while others got older versions. The company mascot who shows in images which illustrate all of the characteristics of the SPECIAL character system (perks, traits, statistics, et cetera) is often incorrectly called "Pipboy" (even in Fallout Tactics). His real name is Vault Boy. 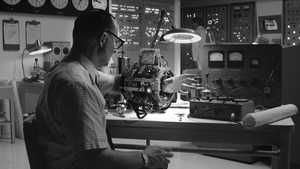 The Pip-Boy 1.0 is the earliest known functioning model of the Personal Information Processor. It displayed information on a monochrome screen, but it is unknown what functions it was capable of performing. Although designed to be worn on the arm, it lacked an outer casing to protect its components and was significantly bulkier compared to subsequent Pip-Boy models. 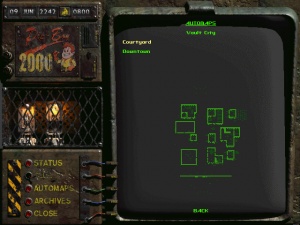 The Pip-Boy 2000 displays information on a black, 5" x 3", monochrome screen. It can record sound and video footage for later playback. Using a simple but elegant form of sonar and satellite tracking (where available), this model can map out areas where its user travels. Though input is slow, a user can also hand-enter and edit text messages on their Pip-Boy 2000s. The Pip-Boy 2000 was worn on the users wrist[3]. These models were, among others, owned by the Vault Dweller and Chosen One. A modified model was used by the Eastern Brotherhood of Steel. 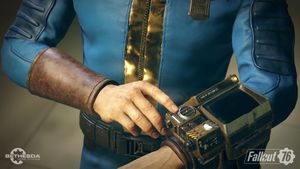 A developmental version of the Pip-Boy 2000, mounted on the forearm and representing a step forward in the development of more ergonomic versions of RobCo's flagship personal computing product. The Mark VI was given to the Residents of Vault 76 who would repopulate Appalachia 25 years after the Great War. Unlike previous versions of the Pip-Boy 2000, the Mark VI is without a real-time mapping feature.[4] But makes up for the lack of mapping with additional features that would be common in future Pip-Boy models like user status tracking, a radio, Geiger Counter, an advanced compass that could display notable locations and nearby persons and creatures, lighting functionality for dark areas, and inventory management. Like the 3000 Mark IV, the 2000 Mark VI is capable of playing video game holotapes. 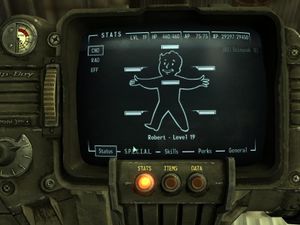 The 3000 model, like the 2000 model, displays its information on a black, monochrome screen. Like the 2000 model, it is capable of keeping tabs on the users health condition, mapping out areas, and taking and storing notes. Unlike its predecessor though, it also comes with added features, such a built-in radio, Geiger Counter and Pip-Boy light, used to illuminate dark areas.[5] There are several models of Pip-Boy 3000 that are designated by letter, i.e. Pip-Boy 3000A.[6] which keep a similar appearance but contain different hardware. The major difference from the 2000 model is its need to be worn as a gauntlet, which seals with a biometric lock[7] the 3000A is locked with bolts and can be removed wholesale, replaced, or temporarily displaced to allow for clothing to pass under it.[8]

In Fallout: New Vegas, the Courier is provided a Pip-Boy 3000 by Doc Mitchell, a former vault dweller. 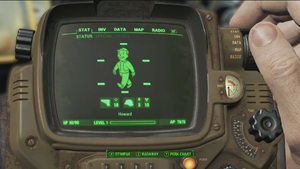 The fourth iteration of the 3000 model was designed solely for distribution by the Vault-Tec Corporation rather than being openly sold on the normal civilian market.[9] Unlike earlier models, it is attached to the forearm with a latch on the bottom, rather than a bolt lock. All perks, statistics, et cetera have moving images. The three tabs from the 3000A model have been expanded to five tabs, separating the Map and Radio tabs from the Data tab. The Mark IV model also is capable of playing game cartridges. Certain vault doors (such as those of Vault 81 and Vault 111) require a Pip-Boy 3000 Mk IV interface to operate. 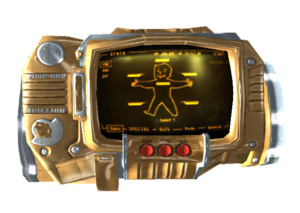 A modification of the standard Pip Boy 3000, this extravagant solid gold model is encrusted with diamonds. It can be obtained from Mick at Mick & Ralph's in Freeside, after you complete the Omertas quests and get them to buy weapons from Mick once more. This is his reward to the Courier, but he will switch between the two at the Courier's request. The "Wild Wasteland" trait causes disco music to play whenever it is equipped (the first time and every time you switch back from the original model). 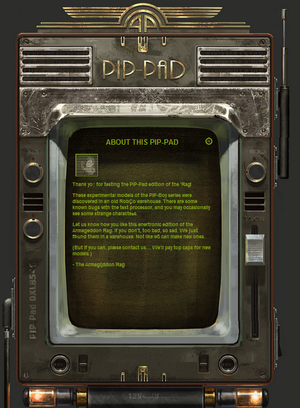 The PIP-Pad is an experimental tablet-sized version of the Pip-Boy series, mainly for reading high concentrations of text and viewing high-resolution graphics. A cache of these devices was discovered after the Great War in an old RobCo Industries warehouse by the staff of The Armageddon Rag. There are some known bugs with the text processor, and users may occasionally see some strange characters. 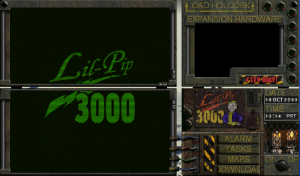 A miniature version of the 3000 series exists, appropriately called the Lil' Pip 3000. It was to be featured in Van Buren.

A variant of the Pip-Boy with a built-in health monitor, motion sensor, and a unique program creating and editing tool. It was designed and worn by Victor Presper.

The player characters in Fallout, Fallout 2, Fallout 3, Fallout Tactics, Fallout: New Vegas, Fallout 4, and Fallout 76 are all equipped with different versions of Pip-Boys. Multiple characters in Van Buren were to wear Pip-Boys as well.