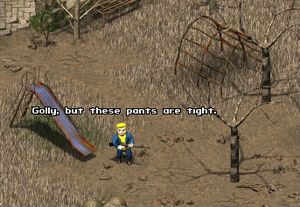 Vault Boy and one of his many wonderful quotes

Pipboy is a special encounter in Fallout Tactics.

In this special encounter you find the famous Vault Boy, called Pipboy here, wandering around a radioactive playground. He speaks in a weird 50's style and carries an FN FAL. If you have full squad, he wanders away when you talk to him. If you have less than that, he joins you.

As explained in this article, the 'Vault-Boy' is incorrectly called 'Pip-Boy' in this encounter - 'Vault-Boy' being the name given by its creator, Leonard Boyarsky. It is a common misconception, as the character was never given a name in-game, only referred to in interviews.

The 'Pip-Boy' is the red haired, pointy-eared character that featured on the Pipboy-2000 in Fallout 1 and Fallout 2.