It's highly unlikely you'd understand anything I'd say. Suffice to say I'm a certified genius, and when I'm discharged from this pit of testosterone and failure, I'll have all the money I could ever need.

Private Poindexter is a soldier assigned to The Misfits platoon at Camp Golf in Fallout: New Vegas.

Soldiers tend to be an exceptional type of human. Selfless, brave, and unafraid of hard work. Poindexter is none of these things, compensating for it with an ego the size of Hoover Dam and thinly veiled contempt for his fellow troopers. To himself, he's a certified genius whom everyone at the Camp looks up to. To everyone else, he's an annoying know-it-all who cannot follow orders.[1][2][3][4][5]

If anyone wonders what someone like Poindexter is doing in the ranks of New California's military, it's simple: He figures that the benefits offered by the Army, both in terms of money and prestige, are worth the risk of bodily harm. To minimize the risk to himself, he deliberately rides the mediocrity gradient, doing just well enough to stay in service, but not good enough to be sent to the front lines. That way, he can eventually "work" his way to a cushy desk job back in New California as, technically, a veteran.[6][7][8] A veteran's pension is an added bonus.[8] 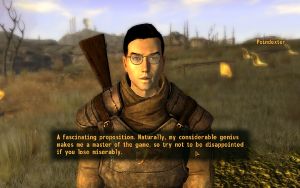