The police pistol is a weapon in the Fallout: New Vegas add-on Dead Money. 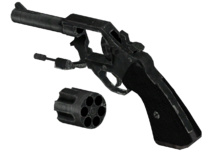 The police pistol outclasses the .357 revolver in three key performance areas. It produces a much higher damage output with critical hits (it inflicts even more damage than the .44 magnum revolver with such a hit) especially so with the Better Criticals perk, has a faster fire rate, and due to its swing-out cylinder, it can fully reload almost a full second faster. Additionally, it is considered a holdout weapon, and can be concealed and taken into weapon-free locations regardless of the Courier's Sneak skill. A police pistol can fire 1121 regular .357 rounds or about 186 cylinders before breaking.

Like many other Dead Money weapons, the police pistol cannot be obtained outside the Sierra Madre. Within the Villa and its environs: