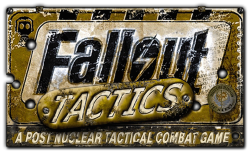 The single-player demo includes four training missions and two missions: Dirt Haven and Devil's Graveyard. A squad of Brotherhood Initiates is sent to deal with raider gang leaded by Gargantua. The multiplayer demo adds a multiplayer component to the two-level single player demo.

Read more...
About Fallout Tactics
Fallout Tactics: Brotherhood of Steel, developed by Micro Forté and published by Interplay in 2001, was the first spin-off in the Fallout series. It focuses on squad-based combat and introduces near real-time combat, called "continuous turn-based" by the developers, as well as a multiplayer mode, to the Fallout series.

The game takes place in 2197 in the American Midwest. The Eastern Brotherhood of Steel is trying to claim territory surrounding Chicago. The Warrior, the player character, is a new recruit to the Brotherhood, tasked to lead a squad of soldiers made up of available initiates.