Hervé Caen is a French entrepreneur who founded Titus Interactive with his brother Eric in 1985. Titus acquired Interplay in 1999.

In 2001 Brian Fargo, the CEO and original founder of Interplay, resigned, citing creative differences with Titus, and Hervé Caen became CEO of Interplay. The Van Buren project was postponed by Caen in favour of Fallout: Brotherhood of Steel, and then canceled to start pre-production of Fallout: Brotherhood of Steel 2. FO:BOS 2 was never released, as Interplay ran into severe financial problems.

Among its developers were Chris Taylor, Mark O'Green and Jason Anderson, three of the creators of the original Fallout game.

Read more...
Fallout world
The Fallout world is not quite our own. It is an alternate reality which diverged from ours at some point after the second World War.

The base concept for the setting is the "World of Tomorrow" as imagined in the Golden Age of Science Fiction. This means that before the Great War, the Fallout world was more or less what the people of the 1940s and 1950s thought things would be like in 2077. 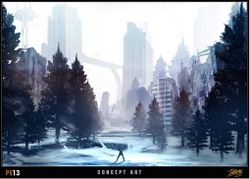 Concept art: "Snow City" by Serg.S
The Vault in other languages