A self contained suit of advanced technology armor. Powered by a micro-fusion reactor, with enough fuel to last a hundred years.

The Eastern Brotherhood power armor, called simply power armor in the game, is a piece of armor in Fallout Tactics.

The ultimate armor for anyone in the squad exposed to danger (i.e. anyone). Although expensive and has a laundry list of penalties associated with it, it's nevertheless a mandatory suit for endgame missions for pretty much all members of the squad.

Availability is restricted by rank within the brotherhood. It is available at the rank of paladin but at a hefty price of $19500. 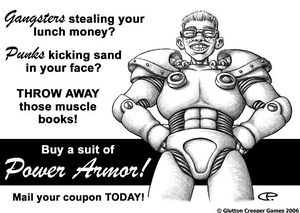 According to the cancelled Fallout d20, the Eastern Brotherhood power armor was based on a commercial variant that was available briefly before the Great War.