I am Alpha and Omega, the beginning and the end. I will give unto him that is athirst of the fountain of the water of life freely. 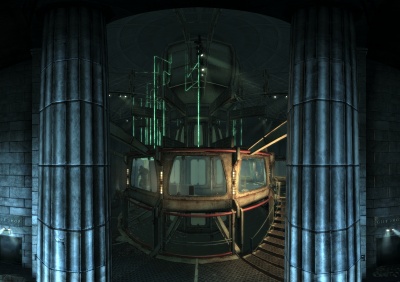 Project Purity was a water purification project in the Capital Wasteland circa 2278, located at the Jefferson_Memorial.

"Fresh, clean water for everyone." Such a simple idea, and yet so impossible to realize. The plan was to build a facility that could purify all the water in the Tidal Basin at once. No radiation, no muck, just clean water.

The brainchild of James and Catherine, Project Purity was founded long[1] before 2257. Inspired by Catherine's favorite Bible passage, it was an ambitious attempt to create a water purifier capable of purifying water stored in the sealed-off Tidal Basin, providing millions of gallons of drinkable water to the wasteland. After years of work and preparation, the Project team selected the Jefferson Memorial as the site of the purifier - a natural choice due to its location.[2][1]

However, building a large-scale water purifier capable of processing the Basin and filtering out the pervasive radiation proved challenging. Small-scale tests yielded consistent successes, but James and his team were unable to scale it up to the desired output.[3] Coupled with the presence of large numbers of Vault 87 super mutants, the Project nearly failed. However, the situation was salvaged by a contingent of Brotherhood of Steel soldiers established as a permanent garrison[4] at the Memorial around December 2257, thanks to James' negotiations with newly-promoted Elder Owyn Lyons. Sentry guns maintained by the soldiers were essential to maintaining a safe perimeter. Madison Li was not fond of the military presence and refused to trust the Brotherhood.[5]

The situation was further improved by Catherine's pregnancy. She refused to slow down or reduce her workload, inspiring other members of the project to continue their work. The team quickly discovered a purification method that was horribly inefficient, but worked, as opposed to most they've tried before.[6] Despite that apparent breakthrough, progress halted quickly, while super mutant attacks intensified. The lack of concrete results, coupled with mounting losses to the super mutant attacks - two dead soldiers and three more injured was a regular weekly tally at this point - strained the team's relations with the Brotherhood.[7] The problems foreshadowed the collapse of the Project following Catherine's death on July 13, 2258, while giving birth. James completely withdrew from the Project, deciding to abandon it entirely and flee with his child to the safety of Vault 101, while super mutant attacks escalated to the point that the Brotherhood was fighting off several attacks each day.[8] As a token of appreciation, Elder Owyn Lyons permitted Star Paladin Cross to escort James and his child to the Vault,[4] then pulled all of his troops away from the Memorial, leaving the scientists to fend for themselves.[8] Betrayed,[9] Madison Li and what remained of the research team salvaged what they could, then moved their operations to Rivet City, focusing on hydroponics and purification in a safe, sheltered environment.[10]

The facilities were completely abandoned and left to the elements for the next nineteen years. James continued to tinker with the principles of Project Purity after he was accepted into Vault 101 as its resident physician. His nightly routine included sneaking into restricted areas and poring over records, looking for a way to make his dream happen. During one semi-drunk excursion, he found records mentioning Stanislaus Braun and the Garden of Eden Creation Kit, which was the missing element of his puzzle.[11] After trying and failing to replicate results using Vault 101's technology (and Jonas Palmer), he realized that he would have to find either the GECK or Braun himself to make any actual progress.[12]

After his child reached adulthood, James decided on a last ditch attempt to achieve the goals of Project Purity. He escaped Vault 101, causing a brutal crackdown by the Overseer and his security force that forced his child to abandon Vault 101 as well. He first visited the derelict facility,[13] rigging several fusion generators to activate emergency lighting and basic systems. Then he departed for Rivet City, to ask Li for help in powering the mainframe up and restarting the project.[14] Understandably, Li told him in no uncertain terms that she's not interested - after all, James betrayed her nearly two decades earlier and came begging for her help without anything to show for his efforts.[15] This only strengthened James' resolve to find Braun and the GECK.[16] He left the facility again, this time to look for Vault 112.[17]

The Lone Wanderer followed in their father's footsteps, clearing the Memorial, rescuing James, and aiding him in convincing Li to give the Project another chance. However, as the facility was brought back online and the team prepared to restart their work, the Enclave under Colonel Augustus Autumn deployed to the Memorial in force. After subduing the team, Colonel Autumn confronted James and demanded that he turn over the facility to the Enclave, together with all existing documentation, and aid Enclave scientists in bringing it online. Defiant, James refused, which cost Janice Kaplinski her life. Afterwards, he pretended to comply, only to disable the radiation shielding and flooding the control chamber with lethal levels of radiation. Colonel Autumn survived, James did not, while the rest of the team safely made it to the Citadel through the Taft Tunnel.[18]

The Enclave set up a defensive perimeter around the Purifier using forcefield generators and focused on repairing the purifier, waiting for the Lone Wanderer to clear the way into Vault 87 and procure the GECK. After Colonel Autumn and his strike team captured the Wanderer at the Vault, the GECK was installed at the Jefferson Memorial and awaited the correct code.[19] While the Enclave hoped to activate the Purifier and leverage the clean water supply to establish their dominion over the wasteland, Lyons' Brotherhood of Steel activated their trump card, Liberty Prime, and in a last-ditch attempt at victory attacked the Purifier using it as the spearhead. The desperate plan worked, with Prime carving a swathe through the defensive lines around the Memorial and scattering the rallying Enclave units, allowing the Lone Wanderer and Sarah Lyons to infiltrate the Purifier, confront Autumn, and activate it before it exploded.[20][21]

The Waters of Life 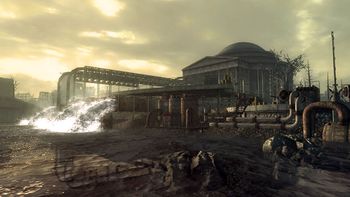 With the Purifier online and performing as expected, the Brotherhood received a powerful economic asset. Unfortunately, Elder Lyons made the decision to provide water to all major settlements in the wasteland, completely free of charge.[22] Elder Lyons' insistence on providing water for free has made finding resources and funding for the operation extremely hard. So hard in fact, that it forced Scribe Bigsley, the man in charge of the entire venture, to go against his orders and sell water, in order to actually be able to accomplish what he's been ordered to do.[23][24] Another problem was that bottling water had to be accomplished manually, as the Brotherhood is too preoccupied with reverse-engineering Enclave tech to devise a bottling machine.[25] The entire operation was also severely hampered by a general lack of resources and planning.[26][27]

Elder Lyons' death and the reunification of his chapter with the Outcasts have most likely reversed this trend of attrition in the name of charity, with Project Purity acting as the backbone of Brotherhood's operations and control of the Capital Wasteland.[28]