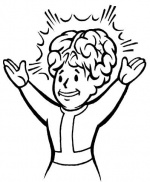 I dunno. I think there's something to it, yeah, but there's just not enough evidence.

”— Ian, when asked about psychics

A psyker[1] is a person who possesses paranormal and psychic powers. A rare sight even right after the Great War and the Master's experiments, nearly all psykers are a product the latent radiation and FEV found in the environment of the post-nuclear world. Psyker powers can take many forms from the common telepathy and precognition to the more physical such as control of animals and mental attacks of the mind.

These strange powers have many causes: Forced Evolutionary Virus, mutations from radiation, natural mutations and centuries of seclusion are among the conditions that can foster these psionic abilities. These abilities include, but are not limited to: control over electricity, fire and light, short and long-range telepathy, premonition and the ability to foretell future events. Canonically, all pyskers were wiped out with the destruction of the Cathedral in 2162,[1] but psykers continue to pop up throughout the wasteland through the conditions stated before.

After being dipped in FEV vats, absorbing some other people and being connected to the LA Vault computer, the Master gained some psychic powers to an unknown extent. He was able to attack humans mentally, although his attacks could be repelled with proper training. The Master was able to somehow bring forth psychic abilities in certain humans after they were injected with FEV (usually the pineal gland, but also the amygdalae or medulla oblongada), but most of the experiments were failures (resulting in insanity) or used to line the corridor of revulsion.

Additionally, Chuck in Adytum appears to have some psychic powers.

Psyker is a term that was originally made for the Warhammer 40k tabletop games.