The disused railway station on the East Side of New Reno is controlled by the Wright family and serves as the hub of their alcohol operations.

Located on New Reno's more docile East Side, the rail station is at the north end of the block, directly above the Wright family's East Side manor. It is one of the very few inhabited buildings on the block.

The station itself is largely dilapidated. The exterior and interior of the building are badly stressed by age, neglect, and outright vandalism, and much of the interior furniture has been badly damaged. The rails themselves, although unused for many decades, are still present behind the station, although their usability is highly questionable. 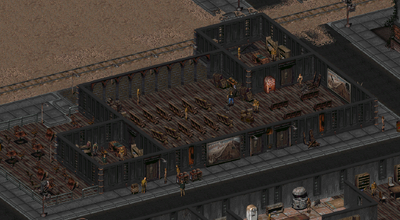 Spanning two levels, the station is a very busy place thanks to the Wright family's alcohol business.

The first floor, at ground level, is host to a number of Wright family guards as well as Chris Wright, an elder son of family head Orville Wright. He oversees operations at the station.

However, the beating heart of the family's livelihood resides below ground, in the station's lower level. Here, massive stills are in constant operation, producing quality alcohol that the Wright family depends upon for its financial solvency. Security is predictably tight, and almost all of the workers around the stills carry a weapon of some sort. There is very little in the way of valuable goods available, with the exception of a quantity of liquor.

Ethyl Wright, the Wright family matriarch and ardent prohibitionist, believes her husband shut the stills down at her insistence. Knowing that the stills represent his family's only source of sizable income, Wright chose not to shut down his operations, but rather to relocate them under the rail station north of his home. This achieved two goals for Orville: placate his wife and keep food on the table.

Despite the fact that the stills represent the bulk of the Wright family income, Ethyl Wright is a constant threat to the operation; were she to discover the stills were in operation, she would demand either their shutdown or destruction.