The Rat Caves are a place underneath Klamath. This is the source of the rodent scourge. Citizens have lived in the buildings above, and perhaps inside the caves, but were killed by the invading mole rats. The rodents are commanded by Keeng Ra'at.

Simple and straightforward. The ladder in the east leads directly to Keeng.

Somewhat counterintuitively, the second level is only accessible by using the northeastern ladder. It leads to the area with the wrecked Chryslus Highwayman and the fuel cell regulator. The locked door can be picked open or blown up with the dynamite on the nearby shelves. 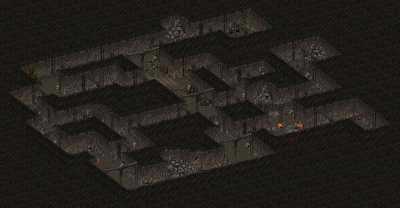 The deepest level, where Keeng resides. There's a dead trapper in the alcove just north of Keeng's chamber, with a 10mm pistol on the corpse.

The Rat Caves appear only in Fallout 2.