Born in 2047,[4] Raul has had a long and storied history. Before the war, Raul was a delinquent living at Hidalgo Ranch outside Mexico City. He was a good shooter and mechanic, both of which occasionally got him in trouble with the law, although his family mostly kept him in line. The ranch survived the war, being far enough from Mexico City, but the stream of refugees from the cities proved difficult to deal with. The Tejada family was as accommodating as they could be, but they eventually simply ran out of room and food, and had to start turning people away.[5]

Things became so violent Raul and his father had to get their guns to drive them away. Around two dozen people returned later that night, after they went to sleep, barred the doors and set the house ablaze. Raul and Rafaela managed to escape out a window, but his parents, grandmother, two brothers and two of his sisters were not as fortunate. Raul and Rafaela ran from the ranch being pursued by the group that attacked their home. He killed the ones that came after them, but the rest he left be. He didn't want to throw his life away seeking revenge, because he had to take care of Rafaela.[1]

After the fire, Raul knew that they couldn't stay at their ranch anymore and the refugees wanted him dead so badly they put a bounty out on him. Despite his sister's fears, he convinced her to come with him to Mexico City by promising to take her to see the vaqueros. They thought they should go to Mexico City to look for help, not knowing the nature of atomic bombs. Though it wasn't hit as hard as other places, by the time the Tejadas reached Mexico City, it could only be described as a "radioactive ruin." The people inside the city got by through looting, already forming the area's first raider tribes. The Tejadas were living like scavengers, always looking for their next meal and medicine for Raul's burns. This is the time Raul believes that his ghoulification began.[6]

One day Raul found a novelty costume shop looking for something to slice up and with which to wrap his burns. He found an old Vaquero outfit inside, still untouched on the rack. He took it and wore it back to their camp. Rafaela loved it; it made her laugh for the first time since the bombs fell. However it was dangerous to be dressed this noticeably. Combined with his stellar gunslinging skills, Raul started to become known and feared as the "Ghost of Mexico City", and while his reputation sometimes drove off trouble, it would end up causing them most of the time, as his antics began to attract the attention of glory seekers. Though this worried him, Raul noticed how the outfit kept his sister happy, so Raul kept wearing it and his legend in the area continued to grow. Feeling increasingly optimistic about him and his sisters' chances, Raul started to play with the thought of carve out a permanent niche in Mexico City, but things would soon take a turn for the worse.[7]

Getting increasingly sick and weak from radiation exposure, Raul eventually found himself too ill to go out scavenging with his sister (this illness was to be indicative of the early stages of "ghoulification"), and as such she was left to provide for the two on her own. One day, after she failed to return from a market where she had been scavenging for food, Raul went in search of her only to find her brutally murdered, her corpse violated by raiders so horribly that she was only identifiable by a tiny scar on her knee. Raul tracked down the raiders at the market responsible and killed them to the last man, afterword shunning the Vaquero outfit that had attracted him the attention that he felt had killed his sister.[8] 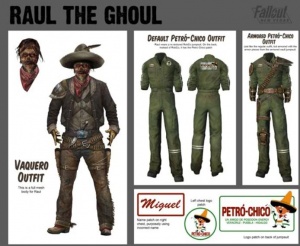 Leaving every aspect of his former life behind, including as Raul cleverly says, "his face", he wandered to the Gulf Coast and inhabited an unclaimed Petró-Chico refinery. He spent a long period of time here, thinking about his life so far. He found a Petró-Chico jumpsuit and began to wear it, taking the name "Miguel"; the name on the nametag. He eventually arrived in the town of Tucson, Arizona now known as Two Sun. He settled there, becoming a mechanic and a general handyman, his guns stashed away where they could do no further harm. After 75 years of relative peace, he met Claudia - a prostitute working in a local brothel who bore a striking resemblance to Rafaela. Spurred by this reminder of what he lost, he took the time to look out for her – though for obvious reasons, he never visited her.[9]

This peace was not to last. Arizona, overrun with raiders and tribals before the rise of Caesar's Legion brought stability to the region, brought 'Dirty Dave' and his six brothers to town looking for bullets. Raul sold them ammunition, hoping they would leave now that they had what they wanted - instead, they decided they wanted the brothel. Once in the brothel, Dave and his brothers killing 4 girls and taking Claudia for their own use. Raul gave chase, and after a three day pursuit across the wasteland, Raul caught up with them. By the time he found Claudia, she was already dead. Enraged, Raul charged in and killed all of them in the resulting showdown. Youth, however, was not on his side anymore and the battle left him severely injured; he only stayed alive out of pure spite for Dirty Dave and his brothers.[10] Having taken several bullets, Raul stayed at their camp until he got the strength to get up and walk back to Two Sun and recovered.[11]

Feeling dejected, Raul wandered west to the Mojave Wasteland, where he built himself a small shack in a relatively quiet corner of the desert east of New Vegas, and settled down there, spending his days listing to the Black Mountain Radio. One day he lost the signal being transmitted and decided to wander up to Black Mountain to investigate. There he offered his services to Tabitha, the nightkin who broadcasted there, and fixed the transmitter, but to his dismay Tabitha decided to imprison him for his efforts, and threatened him into working for her, mostly with repairing broken toasters for the super mutants as well as performing repairs to her broken Mr. Handy, Rhonda.[12] If freed from captivity, he will join the player out of gratitude. A new taste of adventure reminds Raul of his tumultuous past, prompting him to consider if he should embrace his old gunslinging ways, in which case he will be forced to decide between two different ways of life.

When compared to the other human companions of the Wasteland, Raul is perhaps the most tolerant towards the Legion when compared to everyone else who would suffer should the Legion be victorious. He is not affected by the Legion's presence on the wasteland and admires the security and order brought by the Legion, although being a ghoul he wouldn't be able to join them with their hatred towards all forms of mutants.[13] He feels a similar indifference to the New California Republic, acknowledging both their successes and failures, like most pre-War governments had.[14] He also has quite an insightful amount of knowledge about Mr. House, as Raul knows of House's pre-War exploits.[15][16]

Effects of the player's action