And you thought mutants were diseased.

Redding[1] is a mining town in Fallout 2, located south-east of the Den. Redding can be found eleven squares east and eight squares south of Arroyo.

The town is a collection of wooden buildings, and can be a wild and wooly place. The police force is small, relying on the Sheriff's charisma to maintain peace and order; miners are a rough, hardened bunch that can cause a lot of trouble; while three powers of the wasteland seek to dominate Redding and bring it into their fold.

The primary political division in Redding exists over the growing drug issues and the future governance of Redding. The two large mining companies in Redding primarily dictate policy however they are divided by bitter hatred toward each other's policies.

Marge LeBarge the owner of the Kokoweef Mine supports merging with the NCR. The Morningstar Mine run by "Dangerous" Dan McGrew is in favor of alliance with New Reno. The dispute often culminates in tensions and violence occasionally, usually down at the Malamute Saloon. In addition to the political division Redding is struggling to contain its drug problem and the law enforcement is taxed thin particularly after the sheriff had his leg accosted by a gecko.

Further havoc is being sewn by a band of gangsters led by Frog Morton of the Morton Brothers. Mayor Ascorti is a questionable politician as well as appearing to be primarily a profiteer. His motives all seem to be generated by money as seen by his gambling hall and high rent demanded of impoverished elderly citizens.

By 2281, Redding has been annexed by the NCR and made into the Van Graffs headquarters.[2] The town is represented by a senator in the Congress and citizens from Redding serve in the NCR Army.[3] Redding's importance to the Republic may be greatly reduced by the NCR currency being backed by water instead of gold, following the war with the Brotherhood of Steel. It also appears that the weight of economy in Redding has changed from gold mining to brahmin trade, as many people are noted for owning a ranch there, most notably Hanlon and the Jamisons.[4]

Redding is home to hundreds of citizens, governed by a Mayor and town council. Law enforcement is present, provided by a Sheriff.[5]

The primary source of income for the town are raw materials excavated by Kokoweef and Morningstar mines, primarily gold. Gold provided by the town's stable workforce forms the backbone of the Core Region's economy, ever since NCR introduced a currency backed by gold.[6] The town also offers the Malamute Saloon, Ascorti's Ace and City Hall run by the town's mayor, and a clinic run by Doc Johnson.

As the primary supplier of gold ore in the region, Redding became the focus of struggle for control over North Californian trade routes. When the Republic switched to dollars as currency, backing them with gold, the mining city became the key to the trade in the entire New California. Whomever controls the supply of gold, controls the currency. Redding was lucky enough to remain far away enough to make a military takeover uneconomic. The three powers instead decided to make the city align with one of them through agents operating in the city, either planted ones (Painless Doc Johnson for Vault City) or voluntary supporters (Marge LeBarge for the NCR and Dan McGrew for New Reno).[7] By 2241, the situation was slowly approaching a critical phase. In January, the first Jet batches began to arrive in Redding as part of a plan by the Mordino family to control the mining city through drugs. Vault City rejected an offer to ally with the Bishop family and the NCR in February, with mercenary attacks designed to bully the City into the alliance beginning a month later. All this was set against the backdrop of the worst dry season in years caused a drought in North California, causing widespread food shortages in the less developed areas, such as Arroyo and Modoc.[8] 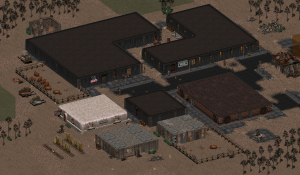 The busiest and most populated part of Redding; pick your poison: The Malamute Saloon offers whoring, drinks and a place to sleep (not recommended for light sleepers). Ascorti runs Ascorti's Ace and City Hall where you can gamble your hard-earned caps away. There is Law in Redding; out-of-towners and trouble-makers are kept in line by Sheriff Marion, who runs the city jail. If a night in the slammer isn't good enough for you, a visit to Painless Doc Johnson's should keep you in line. 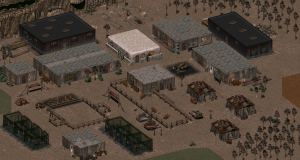 The Molerat Mambo is popular with the locals. Place a bet if you're feeling lucky. Here you will find the Kokoweef Mine, run by Marge LeBarge, and The Morningstar Mine which is owned by Dan McGrew. After losing money betting on molerats (Molerat Mambo), head over to the Last Gasp Saloon and Funeral Parlor for some interesting conversation and maybe a refreshment. 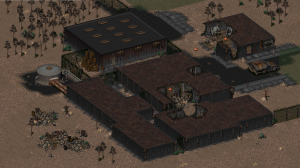 The Great Wanamingo Mine is one of the gold mines in Redding. By 2241, it became inactive thanks to being infested with the alien-like Wanamingos.

Mayor Ascorti tries to coerce newcomers to Redding into buying a deed to the mine billing it as a great investment, $1000 for the richest mine in the town. In order to make any profit from the deed, some eradication is required.

Numerous entrances to the mine exist, including one inside a ripped-open grave. Travel within the mine is extremely precarious, as the Wanamingos have extraordinary senses of perception and can detect intruders even through the walls of the mine, rushing in quickly to dispose of any interlopers. The Wanamingo mine has two levels, and is rumored to contain explosives as well as special electronic chips within the rusting hulks of the mining machinery.

The Morton Brothers and their gang can be found here after accepting the quest Kill Frog Morton. from Sheriff Marion.

The extensive tunnel network beneath Redding connects all of its districts and hosts a number of unfriendly creatures, including pig rats and wanamingos.