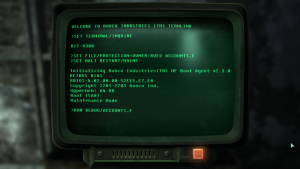 RobCo Termlink is a protocol of the Unified Operating System, used to log into the system and recover lost passwords.

Termlink is a basic program allowing for rudimentary interaction with a given computer system. Apart from logging in, it also allows anyone with a rudimentary understanding of IT to force a reboot in maintenance mode and create a memory dump including the password for the terminal. This security loophole is prevalent in all terminals using the UOS.

In case the protocol encounters an error, it will display an error code.