A robot is a machine that is capable of autonomously completing tasks. Depending upon the robot, these tasks may be simple or complex, and may require little human intervention or complete oversight. Robots had been constructed by pre-War society to fill all niches and occupations. From general-purpose utility droids to full-fledged military battle machines, robots could be found in almost any environment and function.

Typically, robots are equipped with a basic programming structure that dictates behavior and priorities. In most cases, these rules are effectively set in stone, and there's little the player can do to influence them. However, robots can also develop personalities, to the point where some robots seem to develop something approximating actual sentience on par with that of a human. These personalities seem to come from two main possible reasons:

Some robots, such as the Nuka-Cola shipping foreman appear to have rather harsh personalities present from their first days of activation, while others, such as the Protectron series seem to have little personality at all. At times, this personality seems to operate at odds with the fundamental core programming of the robot.

Notable examples of the above-mentioned discontent include Cerberus, the Mister Gutsy robotic soldier that patrols Underworld. Despite programming to protect the ghouls of the city, Cerberus nevertheless admits quite freely that it detests the ghouls and, were it not for his combat inhibitor, would likely kill them all. Sawbones, resident medic at the Citadel, has an unhealthy interest in pain driven by his personality, while his programming states he is a medic. Many Robobrains, when fighting will say things like "They could have programmed me to love, to forgive; but noooooo...", or "Please believe me when I say I'm not enjoying this." Robots can even exhibit finicky personalities - For example, one such Mister Gutsy RL-3 will exhibit distaste in anyone without neutral karma. ED-E, a unique combat Eyebot, exhibited a fairly complex personality, bordering on sentience. Audio logs it played for the Courier during the events of Lonesome Road indicates that it was capable of experiencing a complex pallet of emotions, from anger to love, as well as a form of pain. When bored, the robot would watch holotape movies of its own volition, which may have had the added effect of shaping its somewhat mischievous and childlike disposition.

Even robotic butlers show contrary streaks, although these aberrations are less likely to cause grievous bodily injury. The butler Wadsworth present in the player's home in Megaton in Fallout 3 is often overheard saying with a cheery voice "How can I serve you master?" before shortly muttering, "Not that I really want to...".

It may also be noted that without proper supervision, robots may handle situations rather extremely. Metro Protectron in Washington, D.C. will kill an unarmed person if they do not have a ticket; on top of this, they do not accept red pass or blue pass cards, meaning someone traveling on these lines may be attacked even with proper authorization. Another example of this "robotic extremism" entails factory Protectrons in Pittsburgh killing all the workers when they refused to leave the mill and forfeit their jobs. Also, Milo the shipping foreman, a Type II Mister Handy robot, had trapped a group of employees in a locked closet to die for very minor infractions (taking a longer lunchbreak, for example). With this in mind it can be safe to say that robots of the Fallout universe do not follow Asimov's three laws of robotics (or if they do, very loosely). It would seem that robots have a naturally adverse attitude towards humans, or animated things in general - living or robotic, as all the robots feature a combat "inhibitor" meaning that the robots all exhibit an uncontrollable urge to kill, without the inhibitor anyway. 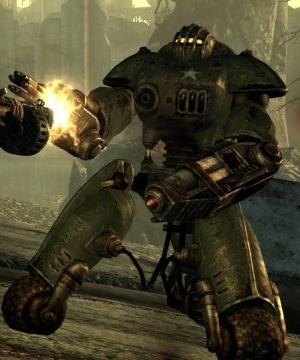 Sentry bots can be deadly enemies to the unprepared.

While some robots in the Fallout universe are peaceful, most are following centuries-old programming — or newer programming — that classifies the player as a threat. To that end, effective anti-robot combat strategies are a must.

Most robots are highly resistant to damage from conventional weapons. Bullets do not generally affect robots as severely as they do their organic masters, and militarized robots can generally shrug off grenade shrapnel. However, like all electronics, robots are vulnerable to the effects of an electromagnetic pulse (EMP), making pulse weapons the ideal choice for disabling a robotic enemy.

Pulse grenades, pulse mines, and other weapons that utilize EMPs are ideal for disabling a robot quickly, and though these munitions are typically expensive, they are much more efficient in a cost-for-effect frame of mind. Explosive weapons like missile launchers or miniature nuclear weapons are still effective, but more costly to use against robots.