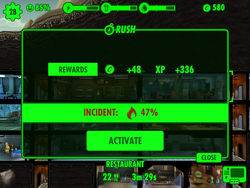 Rushing or Rush Mode is a risk-reward mechanic in Fallout Shelter. It allows you to force workers to rush building production. If successful the room immediately finishes its production cycle, gaining you its resource faster, but failing will results in a catastrophic failure.

You can rush the production of any of your rooms that hold Dwellers within them, while there are no incident in progress. Rushing forces the current production cycle to complete near-instantly, with a chance of catastrophic failure. You can see the the failure chance as soon as you attempt to rush, which is determined by the following equation:

Upon successfully rushing production, you collect the generated resource. In addition you earn some experience for your dwellers inside and caps based on the risk level. For example, if a room rushed has a 20% chance of disaster, the cap and XP bonus would be lower compared to a room rushed with a 90% chance of disaster. Upon failure, one of the four failures will happen: Fire, Radroach, Mole rat, or Radscorpion infestation.

The failure chance will increase with every time you attempt to Rush a room so as not to allow the abuse of low disaster chances, but this temporary increase will cool down after awhile. Additionally excessively rushing a room and having disasters happen will cause the happiness of the stationed dwellers to go down.