Scorchbeasts is a creature type found in Fallout 76.

The first scorchbeast was accidentally created when Enclave scientists exposed irradiated bats to biochemical experiments in early 2083. Although it would have been a wiser choice to exterminate them, Secretary Eckhart ordered further study of the creatures in controlled habitats at the abandoned AMS mining complexes, while keeping the officer corps in the dark.[1] The future President wanted - needed - a way to fool the region's monitoring systems into believing that they were under immediate threat, raising the alert level to DEFCON 1 and giving him access to the nuclear arsenal. Although kept in isolation, theoretically, individual beasts made it to the surface at disturbingly regular intervals, as early as 2084.[2] Despite increasing opposition from the officer corps, Eckhart finally unleashed them on the region in 2086, creating a pestilence that threatened to render the human race extinct on a continental scale.[3]

The people of the wasteland first learned about the Scorchbeasts from reports issued by the Brotherhood of Steel under Paladin Taggerty. Although they dismissed them as pure stories to give Taggerty an excuse to commandeer ammo and supplies, they were soon proven wrong by their appearance and the plague that followed in their wake. The Scorched, terrifying, warped creatures created out of humans afflicted by the scorchbeast plague have become an existential threat to the people of Appalachia.[4] The situation is made worse by the fact that their breeding cycles are off the charts, limited only by the available nest space in the mining tunnels below Appalachia.[5]

Scorchbeasts are a species of enormous, mutated bats that serve as carriers of a curious plague which converts any infected into the Scorched. These creatures possess considerable agility that belies their great size, as even when grounded the beasts have been witnessed leaping several times their body length in one bound. Despite the behavior of their progenitors, scorchbeasts are not averse to daytime hunting, and are known to cooperatively hunt in groups.[4]The beasts are potent foes, as lamented by the Responders, whose anti-scorchbeast tactics boil down to doing everything in their power to keep away from it and finding an enclosed space to fire from, as Scorchbeasts are simply too big to fit into small spaces. Coupled with the radiation they emit, Rad-X is also recommended.[4]Scorchbeasts are also notably capable of using powerful ultrasonic echolocation as a means of navigating[6] or commanding their Scorched servants on the ground.[5] In addition to this, they possess the ability to emit a strong sonic blast from their mouths much like Mirelurk kings and Mothmen, but on a far larger scale. 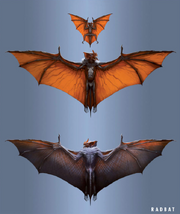