Searching for Cheryl is an unmarked quest in Fallout 3.

Follow the trail of a party who went out to find Cheryl, sister of the party leader.

In L'Enfant South you can find a burial mound containing search party log #1. When exiting the metro turn right and the grave is in front of the last house on the right side of the street.

As mentioned in the first log, go to the Ranger Compound and access the outdoor terminal to read about the Canterbury Search Party. The terminal can either be unlocked by Reilly or is a very hard hack. 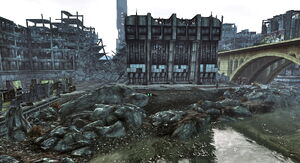 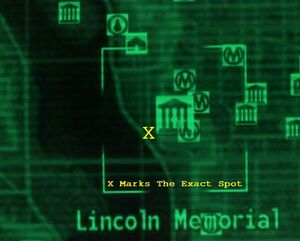 The exact position of the grave

The "Western Ruins" mentioned in the second log are located to the north of Potomac Bridge, below a raider camp. The third search party log is in a second burial mound there. To get to that raider camp, travel to Dukov's Place and head south towards the Potomac Bridge (the only bridge over the big river for miles). Between the raider camp and the bridge you can find the grave. 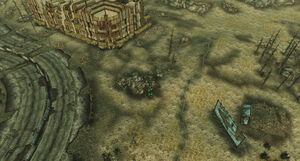 Grave with #4, northwest of Sewer Waystation

Search party log #4 is in a grave directly northwest of the sewer waystation. To find the grave, walk toward a big Corvega billboard (which may have an Enclave poster stamped on it if you have completed the Waters of Life quest). The grave is to the left of and before you get to the billboard, in front of the fence, on the northeast side of some rocks.

A short distance west southwest of Jury Street Metro Station, you run into a group of super mutants hiding out near a small wrecked train. Entering the container with the shopping cart cages causes a super mutant behemoth to appear from the east-northeast (this may be quick, or take a while, as he runs toward you from a distance). In this camp you can find the corpse of Manny Koch, leader of the search party.