From The Vault - Fallout Wiki
(Redirected from Searchlight)
Jump to: navigation, search

During those days people will seek death but will not find it; they will long to die, but death will elude them.

”— Revelation 9:6, quoted on the sign outside the Searchlight chapel

Camp Searchlight was an NCR military camp located in the ruins of the town of Searchlight, Nevada, in Fallout: New Vegas.

Searchlight was originally founded as a gold mining town around 1897. The booming industry led to it becoming bigger than Las Vegas for a time, but as the veins ran dry, it shrunk. By 1917, the once booming mining industry that produced over $7 million in gold between 1907 and 1910 petered out. The town hung on by a thread, before its economy was boosted by Highway 95, making it a stopover point on the way to Las Vegas, and the tremendous expansion of Searchlight Airport. Searchlight was large enough by the Great War to support its own police and fire services, an elementary school, and two chapels.[1]

The Great War would end this time of prosperity, but not before the bombs forced the Searchlight PD to divert a convoy carrying nuclear waste from San Onofre into Searchlight, so that the waste could be safely stored. Searchlight was not considered a target for the nuclear warheads, which meant the trucks could be parked at the Fire Station without exposing them to nuclear blasts that would turn the sealed, secure fuel casks transported on the flatbeds into massive dirty bombs.[2]

The spent nuclear fuel rods remained there for over two centuries, with nobody trying to move them for fear of rupturing the casings. When the New California Republic deployed in force to the Mojave, Searchlight became a natural choice for a military base. It was large enough to quarter troops without a problem, while its strategic location, on top of Highway 95 and near the mouth of the valley leading down to Cottonwood Cove, allowed it to effectively control the south-eastern Mojave Wasteland. Camp Searchlight was established, becoming a major communications and logistics hub for the NCR Army. Naturally, this made it a natural target for the Legion. Vulpes Inculta devised a clever plan to remove the obstacle in Caesar's path. Rather than rely on martial might, he used subterfuge, using frumentarii to first intercept shipments meant for the Camp, depriving the troops of necessary supplies and stockpiling them for later use by the Legion.[3][4] As the supply issues worsened, tensions emerged among the Camp's senior staff,[5] and the frumentarii waited for an opening in the Camp's formidable defenses. The opportunity came soon, as the patrol routes were changed again for operational security reasons.[6] As usual, gaps opened in the patrol routes as the troops had to get used to the new schedule.[7]

Vulpes sent in a small group of legionaries, ordering them to infiltrate the fire station and unseal the nuclear fuel casks. As expected, this unleashed lethal levels of radiation on the Camp. The legionaries were killed instantly, while NCR troops were killed outright, turned into ghouls, or died soon after of radiation sickness.[8][9] Only a handful of troops out on patrol escaped the grisly fate, rallying under First Sergeant Astor.[10] In the meantime, the Legion did not sit idle. A task force under centurion Aurelius of Phoenix landed at Cottonwood Cove, establishing a beachhead on the western side of the Colorado and immediately launching raids on both the surviving NCR troops and especially supply and trade caravans heading up to New Vegas. Further legionary groups moved up north and west as time went by, targeting Nelson and Nipton to lay the groundwork for the Second Battle of Hoover Dam.[11] 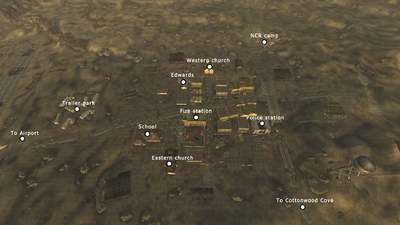 Searchlight surrounds Highway 95 on a north-south axis, and is in surprisingly good shape considering the devastation brought upon it by the Great War, two centuries of neglect, and the recent radioactivity release by the Legion, in a bit to loosen the NCR's hold on the south-eastern Mojave. The sole remaining NCR camp is located on the outskirts of the town to the north-east, staffed by what remains of the Searchlight garrison. Other signs of life are located in the basement of the ruined church in the western part of town, where Logan and a few other prospectors are busy preparing to loot the town on a contract from the Crimson Caravan. The terrified Private Edwards is hiding in a Searchlight home near the church.

The streets of the town and much of the surrounding environs are prowling with feral ghouls bearing NCR colors. They include regular ferals, glowing ones, and a few who managed to retain their motor skills who move and attack like normal humans, but only with combat knives, having lost the ability to operate firearms (they do make excellent sources of medium armor for Jury Rigging). They are most common in the center and to the northeast, where the Camp's command was located (at the former Searchlight police station) and the trucks used to set up the base were parked. The Searchlight fire station (Searchlight Fire & Rescue Station No. 1) is in the heart of town and contains the pre-War transport of spent fuel rods that was used to turn the entire area into an irradiated hellhole. The station is locked, with keys carried by Logan. Entering it will prompt a swift response from the radscorpion queen and several radscorpions that set up nest there. To the south is the Searchlight elementary school with another ruined church. The school is "attended" by several golden geckos, who enjoy the warmth of the town's radiation. Further out is the trailer park that served the inhabitants of the town.

The NCR set up a network of defensive turrets to protect the perimeter, with terminals placed in cover nearby. The turrets are found near the police station, behind the fire station and ont he intersection just south of it, and under the Cottonwood Cove Road bridge passing over Highway 95.