Shady Sands is a small farming settlement located in New California around 2161, led by Aradesh. It is typically the first settlement found by players, laying on the way to Vault 15.

Shady Sands can be found five squares east of Vault 13. Randomly encountered traders can also take the player to the city.

By 2161, it was a small but thriving settlement, completely self-sufficient, as they managed to irrigate the wasteland soil to support crops (primarily maize and cabbage), drill a well to provide them with water, and even establish brahmin herds. Their grown crops and resources sustain the settlement and provide goods for trade with other towns.[1]

The settlement kept mostly to itself, trading with the occasional merchant from Junktown.[2] It proved large enough to deter most of the problems the wastes presented, primarily the local raider clans (another surviving group from Vault 15) and repeated attacks by radscorpions. Both of these threats slowly escalated, as radscorpions became more numerous and aggressive, while the raiders constantly focused their strength and numbers on the fledgling township.

These problems were alleviated by the Vault Dweller, who discovered the settlement en route to Vault 15. Initially distrusting of the stranger, the inhabitants quickly warmed up to the hero as they successfully rid the community of the radscorpion threat, and later rescued Tandi, Aradesh's daughter, from captivity at the hands of raiders.[3] 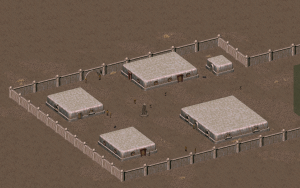 The western part of the Shady Sands is organized around a central pillar, telling stories of the settlement. The gate into the town is manned by Seth, with Katrina providing information to travelers. Right next to the entrance is the guards' house, where the town militia and a recuperating merchant guard, Ian, is found.

Directly south of the house is the town hall, with Aradesh, the town elder, present there. Tandi, his daughter, roams around the building, while the Cook is busy with her culinary pursuits. Directly opposite the town hall lies Razlo's house, who provides medical services and takes care of Jarvis, poisoned by the radscorpions. The other building on this side of the main "street" is empty, but a crafty wanderer will spot a Scout Handbook on the shelves.

various citizens, peasants and children wander around the town. 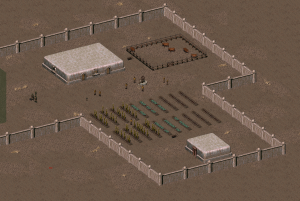 The eastern part of the town is centered around the town's well, with the brahmin pens and mutated maize and cabbage fields surrounding it. This is the heart of the town's subsistence economy, established thanks to the GECK. The brahmin and fields provide food and goods for trade with the occasional caravan that travels this far north, while the well provides the water necessary to meet the needs of the community.

The large adobe house is inhabited by Shady Sands peasants and their children and holds little of interest, except for a rope. Notably, a weather-beaten farmer standing in the fields can be aided by providing information on crop rotation to improve the town's agriculture.

Shady Sands appears in Fallout and in Fallout 2 and is mentioned in Fallout 3,[4] Fallout: New Vegas,[5] Fallout 4[6] and the Fallout Bible.