The Sheriff's department is a location in New California Republic's capital.

The central law enforcement center is complete with offices, a locker room and detention cells. It is occupied by three police officers at all times, including Deputy Karl. It is important for the quest Retrive Parts/Gain Access to Vault 15. as one of the squatters is detained in a cell. Talking to the deputy with Tandi's permission to 'interrogate' him will grant you access.

He will give you no information until physical contact is made, for example punching him in the face, and then claiming that no-one will save him will cause him to give the Chosen One their desired information. 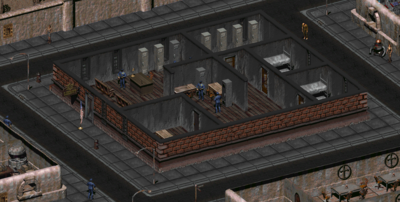 The building is mostly open plan, and there is a main desk at the front as one enters. There are desks just around the corner and the corridor then leads to a pair of cells. There is also a small separate office which is most likely to be the Sheriff's, but as he is always on the street it is impossible to tell. Lastly, just past the cells, there is a locker room with an armed guard to deter thieves.

The Sheriff's department (NCR) appears only in Fallout 2.