From The Vault - Fallout Wiki
(Redirected from Slavers)
Jump to: navigation, search 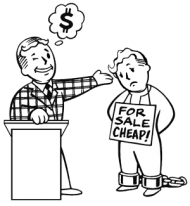 Slavery is a system under which people are treated as property to be bought and sold as commodities. After the Great War, slavery became a lucrative business once again. Although many of the larger pockets of civilization have outlawed slavery, the practice persists throughout the wasteland.

The organization of Slavery is as widely varied as it is dispersed. For example, the slave trade in New California is done under the auspices of the centralized Slavers Guild, while in the Capital Wasteland it is highly decentralized.

Slavers in the Fallout games do not discriminate between people based upon their race, species, or ideology; anyone who can be easily cowed into submission, captured, and fitted with a slave collar is perfectly acceptable for them to use. Similarly, slavers themselves may be of any ethnic background.

All the slave trade in New California is done under the auspices of the Slavers Guild. The Chosen One is able to join the slavers for extra cash, but their karma will take a beating, and they will be branded permanently as a member of the Slavers Guild, which may negatively impact the reactions of certain NPCs.

The slave trade in the Capital Wasteland is highly decentralized. The Slavers of the Capital Wasteland have a single fortified settlement Paradise Falls. The Lone Wanderer can join these slavers after gaining entrance to the settlement. After completing the side quest Strictly Business, the repeatable quest Strictly Profitable can be done. Additionally, the Lone Wanderer can buy the slave, Clover, who will then become the player's companion.

The primary opposition to the slavery of the region comes from the Temple of the Union, who the Lone Wanderer can also join by completing the side quest Head of State.

The slavers of the Capital Wasteland sell their captives to more prosperous customers outside the region. The main customer as of 2277 is The Pitt. An entire city of slavers who are recently using their slaves to build a society under the leadership of Ishmael Ashur.

Caesar's Legion is the primary slaving entity that enslaves any captures of their raids that aren't killed in battle. Many Legion slaves can be found at The Fort carrying heavy loads on their backs as well as working to keep the Legionaries fed and healthy. It is also implied that sexual abuse at the hands of the legionnaires happens to the slaves on a regular basis. Occasionally, if a slave gets mouthy or refuses orders, they are sent to the Arena where they fight challengers to the death.

While not as common as many parts of post-apocalyptic America, Appalachia had an organized slave trade of its own stationed out of the Tygart Water Treatment plant. The slavers based out of that area used the water treatment plant's water vats as holding cells. Admittedly, this was not the best place to keep slaves as on more than one occasion flooding of the water vats killed more than a few slaves.[2]

In Fallout the only direct mention of slavery is by the Khans' hostages. Slavers appear in Fallout 2, Fallout 3, and Fallout: New Vegas. In addition to Fallout: New Vegas, Caesar's Legion was to have a major role in the canceled Van Buren. Cait in Fallout 4 mentions being sold to slavers by her parents,[3] and in the Fallout 4 add-on Nuka-World the former traders of the Nuka-World theme park appear as slaves. Radiant quests also allow for the player to participate in enslaving various NPCs with collars.