The following section is transcluded from Submachine gun. To modify, please edit the source page.

Commonly considered to be one of the finest weapons in the world, the Heckler & Koch MP9 submachine gun fires the powerful 10mm ammunition. Although the single shot is comparable to the Colt 6520 or the N99 pistol, the MP9 truly shines in burst and fully automatic modes. Coupled with the compact design, sturdiness, and light weight, it becomes a powerful asset in the hands of anyone in the wasteland. Although, the high fire rate means the urge to spray-and-pray must be controlled, unless the operator wants to run out of ammunition. Thankfully, the ease of handling makes this easier than it seems.[1] An unique feature of the weapon is its two selectors: one for switching between safety, single shot mode, and automatic mode, and another for specifying the size of the burst, up to fully automatic fire.[2][3]

The Sleepytime has been fully customized for operations requiring stealth. Its oversized suppressor muffles the report to the point where the cycling of the chamber is louder than the shot. The internal mechanisms have also been finely tuned to improve muzzle velocity and rate of fire, without ruining the suppressor. The custom magazines also mean a 33% larger amount of ammunition per mag. Finally, the gun boasts a tasteful matte-black finish, to blend in on night time occassions. 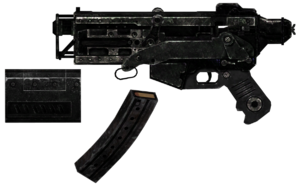 The 10mm SMG has a proud history in the wasteland, and this (GRA) variant model continues that tradition of excellence. Due to an integrated suppressor, it's accurate and deathly quiet. Internal modifications boost damage and slightly elevate the rate of fire, turning this into a covert powerhouse. It is well worth the cost as it will kill most human enemies in 10-20 shots.

Sleepytyme is also considered an improved holdout weapon, making it the only automatic holdout weapon. This makes it a natural choice when working on the GRA challenge "Nyah! See?," and is the only weapon that can be used for this challenge without turning all of the casino guards hostile.