From The Vault - Fallout Wiki
(Redirected from Slots)
Jump to: navigation, search 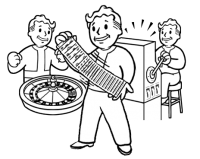 Gambling games in the Fallout universe are forms of entertainment post-war or pre-war, derived from a set of artificial rules, typically with a known goal to be reached. The final result of players is usually to earn or lost money or something of material value on an event with an uncertain outcome. Many gambling games have created after the Great War, for earning money by someone, by many, and lost money by some.

A casino game played with a standard deck of 52 cards. The player and dealer each draw cards to an initial two card hand with the object of bringing the total hand value as close as possible to 21 without exceeding it.

A card game played with two players and popular throughout the Mojave Wasteland. A Caravan deck must consist of at least 30 cards from one or more traditional playing card sets and may have any number of cards of any type, although it cannot have duplicate cards from the same set. Prior to the game, the opponent will place a bid and the player can then either match or raise the bid. After, the players choose their cards and the game start. The principle is to building three caravans of numbered cards and the goal is to outbid the opponent with the highest value of numbered cards without being too light (under 21) or overburdened (over 26).

A few craps tables are run by Becky in her bar and casino out in the Den. Interestingly, the craps tables are simulated identically to regular craps and do not use the player's Gambling skill in any checks.

A boxing games existing only in New Reno. The players can bet on the outcome of boxing matches or fight in the ring themself with a sponsor. The champion holds the title of Heavyweight champion of Northern California.

A boxing games existing only in Junktown. The players can bet on the outcome of boxing matches, either Saul or his Challenger. The challenger can be a man or a radscorpion.

The popular Midwestern gambling, two players bet some of their items and the winner is then drawn. One with the highest value have a better chance of winning.

An arena game existing only in Redding. The players can bet on the outcome of fights between two captured and named molerats.

The only proof of its existence is a special encounter named Brahmin Poker in Fallout Tactics, with strange brahmins playing poker, and an abandoned game of Texas Hold 'em in the Hoover Dam mess hall.

An arena game existing only in Coldwater. The players can bet on the outcome race between four radroachs.

A casino games played with a Croupier and a roulette. The players place a bet on the outcome of the roulette and the Croupier spins the roulette wheel in one direction, then spins a ball in the opposite direction along a grooved track running the circumference of the wheel. When the ball loses momentum and falls into one of the 38 'baskets', the winning number and color is announced, and bets are paid out as appropriate.

A special secret casino games with special rules of roulette play only in Stockmen's Association in the New California Republic city.

An arena game existing only in New Vegas. The players can bet on the outcome of fights between wasteland creatures or fight in the arena them self.

A collectible card game only known in New California, and by Wooz. The game can be played by two or three players (unless it's Thursday), each using a deck of special cards called "Tragic cards" of the "Tragic the Garnering" set and may have any number of cards of any type of the many in the "Tragic the Garnering" set. In the game, the players are engaged in a battle and each start with twenty "life points." If the players life points reach zero or below, the player loses. Players lose life when they are dealt "damage" by being attacked with summoned creatures, spells, or other cards that cause them to lose life directly as stated on said cards. Also, a player can lose the game if he/she is out of cards to play. A few of the cards include ones such as a Black Dahlia (one of the most valuable cards and has the ability to be sacrificed for three mana [the magic fuel used to cast spells] of any one color), Vox Muby (an 'artifacts' card that costs nothing to play and adds red mana to the owner's mana pool), and Earths (more mana providing cards).