A Sneak Attack Critical occurs in Fallout 3, Fallout: New Vegas, Fallout 4 and Fallout 76 when attacking while [HIDDEN]. Successfully hitting the target will result in a guaranteed critical strike unless the weapon does not allow critical hits. 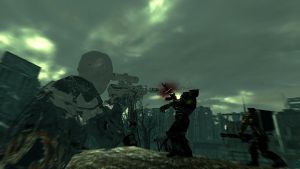 A Sneak Attack using a silenced weapon and a cloaking field.

Certain weapons, like the microwave emitter, have relatively slow projectiles. Outside of V.A.T.S. this may sometimes cause an enemy to detect your presence before the shot reaches him, nullifying the Sneak Attack Critical bonus. For that reason, make sure you are close to your foe before trying to Sneak Attack Critical, if you are using these weapons.

Damage calculated if the weapon is fired outside of V.A.T.S., and all pellets make contact. (See below).

For most creatures in the game, a sneak attack headshot, along with the Better Criticals perk, can be an instant one-shot kill on Normal difficulty or lower. (Even the low-damage dart gun can kill raiders with one sneak attack headshot ) In some cases, however, it may not be possible to line up a headshot on a target, due to target facing or an obstructed line of fire.

In these cases, even a sneak attack critical on an arm or leg can prove fatal to the target. Though results may vary based on the character's skills and perks, it is possible to shoot off a target's limb—an instant kill—with one shot from a sniper rifle. This may be a worthwhile consideration when chances to hit an appendage are significantly higher than head or torso shots.

Weapons that fire several "shots" at the same time, such as combat shotguns (and The Terrible Shotgun), Metal Blaster (from The Pitt), Protectron's Gaze, the tri-beam laser rifle (from Broken Steel), and Paulson's revolver (from Mothership Zeta) are some of the most effective weapons for sneak attacks (when done outside of V.A.T.S.). This is due to the fact that outside of V.A.T.S., each of the weapons' "shots'" critical damage is calculated individually. This aspect makes these weapons very effective in sneak attacks (and regular critical hits). With the right addition of perks, such as Better Criticals and Finesse, these weapons will be able to deal large damage consistently.

The Terrible Shotgun is the best example for this concept. While in perfect condition, and with a Small Guns skill of 100, the weapon deals 80 damage, with an extra 40 damage for critical hits. However, this weapon fires 9 pellets. Because of this, when the weapon is fired outside of V.A.T.S. and scores a critical hit, the critical hit for each pellet is counted individually. This means that (if all pellets make contact), the weapon will deal 440 damage (80 base damage, plus 9 extra 40 critical damages). In Sneak Mode, this damage is doubled, increasing it to 880 points of damage. And if the player has the Better Criticals perk, the damage will increase to 1240. If the player further increases the damage via a headshot, then that damage doubles again to 2480! High enough to kill any enemy in the game with a single shot.

It is worth mentioning that in Fallout: New Vegas, most multi-shot weapons have had their crit damage significantly reduced. As mentioned, in FO3, The Terrible Shotgun has a base damage of 80 and a crit damage of 40. Compare to the riot shotgun in FONV, base 75 damage, but only 10 crit damage. Thus, on a full 7-pellet-hit SAC, the total damage is 75 base + 70 critical = 145 total x 2 SAC multiplier = 290. This is still enough to kill most enemies outright but is significantly less than the previously illustrated 880 from the FO3 Terrible Shotgun. This is most likely a change implemented to directly counter the rapid "over-inflation" of critical damage as outlined in the previous sections.

However, this also has the side-effect of lowering non-SAC critical damage, and more significantly V.A.T.S. criticals & SACs with multi-shot weapons. Because each pellet will only add 10 damage if it crits, in V.A.T.S., a regular crit will only do 75 + 10 = 85 for a normal crit, or 170 SAC damage. These changes make crit % increases somewhat under-valued for characters using multi-shot weaponry.