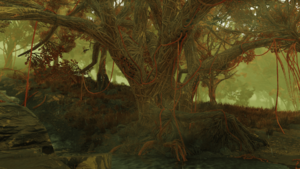 A plant overrun by strangler vines.

Strangler vine is a peculiar mutated plant endemic to the post-nuclear Mire, notable for its tendency to attach itself to living things, especially large things that dominate the valleys to the northeast of the Appalachians.[1] The strangler is best described as an infestation, as the red vines use everything they can attack not just as support, but as sustenance. Trees overrun by strangler vines wither and die as the plant saps it of nutrients, turning it into a withered husk, while inanimate objects are overwhelmed and eventually displaced by the vine mass. If the conditions are right, strangler vines can lift vehicles, buildings, and even bodies of land (eg. Tanagra Town) into the air.[2]

The vines seemingly appeared overnight one day after the explosion of Vault 94's GECK, caused by invading raiders shooting the device.[3] The damaged device turned the territory now known as The Mire into a swamp and brought about the strangler vines.[4] It's not known whether the vines are distinct plants or one, giant biomass slowly overtaking the Mire, or whether they should be classified as plant or animal. What is known is that the vines seem to converge on one, central organism, referred to as a "Strangler Heart" by the Free States, which can react in real time to threats and summon strangler-infested creatures, exhibiting an alien sort of intelligence.[5]

The vines themselves have limited uses. Pods and the rare strangler pod flowers have anti-radiation properties and can be brewed into various teas. Vault 94 dwellers made headway into creating more powerful versions of Rad-X using strangler components, before their extinction. Ella Ames of the Free States was on the verge of creating this RadShield before her death.[6]

Creatures that are infested with the plant seem to have lost all sense and work in a hive mind to defend the Strangler Heart during the Event: Heart of the Swamp. Examples include: