It would appear as though speaking with Doctor 0 that it's possible Big MT and RobCo had a rivalry. 0 seems fairly ticked off about my Pip-Boy, he even went on a rant about RobCo and Mr. House. Xplode441 15:21, July 19, 2011 (UTC)

The quest where you need to take the stealth trials to upgrade the Stealth Suit MKII has you infiltrate a mock RobCo HQ. The final room where you get the document from the safe is pretty much concrete proof of this. I'd say they were definitely rivals with Mr. House and RobCo. The Think Tank doesn't quite like them at all.

At one point in time an announcement came from him that went: "Attention Lobotomites! Do not forget to wash the walking eye!" This is clearly a Dr. Venture reference. Is there a certain thing that triggers this though or is it random? --Ganondorf 05:14, July 20, 2011 (UTC)

^^I agree with the anon at the top, that this page should be changed to 0 (Zero) As that is what his name IS, even though they call him by O (Oh). It's a bit confusing, maybe create a redirect page for people who search him as zero, to this page? Just some suggestions, I don't have time right now to do these edits and keep up with them. --Living Lifeless 9 21:37, July 20, 2011 (UTC)

I say it's O, not 0. Printscreen of the GECK as proof. You can see the difference between the 0 and the O. Don't change it again unless you can proove otherwise.Jspoel 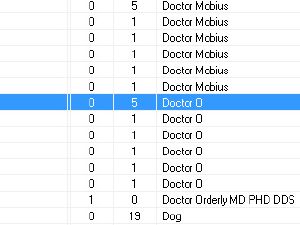 His original name is 0, but due to the fact that it looks so much like a O, that people mistakenly call him by that. GECK has it by that because the player character has to actually talk and pass checks to be able to find out his actual name. So they would put it as O in the GECK as not everyone would be uncovering these details. Also, it makes so much more sense that his name would be 0, as it fits in with the Klein, Mobius, 8(Infinite), etc... --Living Lifeless 9 12:42, July 21, 2011 (UTC)

If you ask me it's kindof a mini-spoiler to just have the wiki refer to him as the number, not the letter. Players are supposed to figure it out on their own, and aren't initially aware of what his real name is. Most people will probably search for his mistaken name, letter "O", as it's the one they hear first, and the one every player knows whether they pass skill checks or not.

You do realise that this whole wiki is a spoiler?

True. =P The whole wiki is a spoiler. And he's named Doctor 0 not Doctor O. It says so when you talk to him, and he says so himself. They should change the name already, and make "Doctor O" a redirect page to Doctor 0. Also on a side note, translations -ALWAYS- call him zero. Not oh. I couldn't understand what he was complaining about in my game, since everyone always already called him zero. (Only in english (as far as my known languages go) the 0 can be slang-pronounced as "oh") Keimei~ 19:24, July 23, 2011 (UTC)

The point is that by calling the page 'O' it doesn't fit with his original name. That's like naming the Joshua Graham page 'Malpais Legate'. He is adamant in the game that his name is 0, which is what this wiki is about, and so surely he should be called 0. He makes a special point, more of a conversation really that he is 0, not O and that Klein and the others are getting it wrong. That's my 'two cents',

Not named after Dr. Orpheus

"Ø" is not the same as Zero

As this article stands now, Ø is being used in one place to mean "zero." Type that character into Wikipedia and you will see that Ø is, in fact, a Scandinavian letter, which means that many Europeans will find our choice here odd. What's more, because the Ø symbol looks more like the symbol for the empty set in mathematics (∅) than it does a slashed-zero, our choice will ALSO seem odd to nerds. Because Fallout is disproportionately popular with both Europeans and nerds (compared to the average American media product), this wiki should take care to not alienate either group.

I initially tried to address this problem by cropping an image of a slashed zero from Wikipedia, and then pasting it into the article here, at 9 pixels wide. But this was reverted. So... other ideas?

I have put the image back based on those reasons, but we need to find a better alternative than using an image.