It stands for "Jacketed Hollow Point". Good for hunting or killing soft (unarmored) targets due to the bullet expanding ("flowering") upon impact, causing much wider wound tracts than the calibre might normally.--Fez 07:44, 16 Mar 2005 (GMT)

Is it in Fallout 3 an option to unload ammo?

Ammo is not normally loaded in a weapon. It's kind of tricky. Let's say you have 120 rounds of 10mm ammunition, and your 10mm pistol has a 12 round magazine. It will show up as 12/108 on your HUD. However, the ammunition is not "attached" to the weapon, but it takes count of how many rounds you've shot. So if you fire 3 rounds, your magazine will have 7 rounds left (9/108) but in your inventory it will show up as having 117 rounds of ammunition. This persists even if you switch weapons. However, I've yet to see experimentation - what happens if you drop the ammo and pick it back up, or the gun, or so on. PlasmaFox 20:32, 26 January 2009 (UTC)

Charon's Shotgun doesn't use the normal shotgun shells. It uses an npc specific version (still called "Shotgun Shells", Editor ID "AmmoShotgunShellRobot"). The Form ID for that ammo is 0004C5F9. Not sure what to do with that info though.Fiddlesoup 01:57, 11 January 2009 (UTC)

Too bad really, I miss AP rounds. And I think Charon's ammo is special because he's really using a modified Lincoln's rifle.

The ammo of all follower weapons is "special" (except for Butch's, interestingly). I'm suspecting it's related either to the weapons being different to their base counterparts or, more likely, to the mechanism which gives them unlimited ammo.

maybe they were trying to keep us from using followers like ammo dispensers... 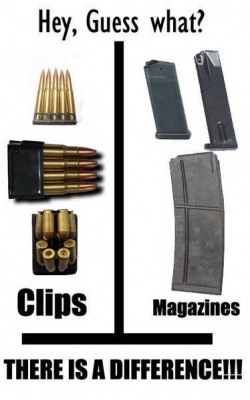 Thanks for the picture, but I got a more Fallout-friendly way to describe it. Image preserved here. PlasmaFox 01:36, 26 January 2009 (UTC)

No problem, I edited the one picture to zoom in on it.

Threw an outline on the "banana clip"

Don't suppose you could upload a picture of scoped.44 / blackhawk being reloaded with a full moon clip / speed-loader clip, I could put it side by side with the Mauser stripper clip.

I don't think so, but what I could do is show the .32 pistol (which is also a revolver) being loaded with a moon clip. It's break-open action so it's easier to view.

This isn't really relative to the discussion or the article, but it's a humorous anecdote that I would like to relate. During basic training, our Drill Sergeant once said to us, "If you call a magazine a clip, I'm going to shove them both up your ass so you can feel the difference." --MadDawg2552 20:25, 26 January 2009 (UTC)

It stays. It doesn't hurt anyone and is useful to educate the uneducated. http://images2.wikia.nocookie.net/fallout/images/thumb/5/5c/Scribe.jpg/15px-Scribe.jpg Tagaziel (call!) 15:35, 4 June 2009 (UTC)

Wow you guys are as bad as the guy sont the /k/ image board at 4chan they get real pissed off when you say "clip" when you're reffering tomagazines. Oh well I guess that's how gun nuts are Lancer AR 06:06, 14 July 2009 (UTC)

Where in the page should we stick it? It applies to more than just Fallout 3 right?

It looked like crap, so I made a table out of it

Should we list this alongside the other Fallout 3 weapons? I know, it has no specific ammunition but we could link it to Rock-It Launcher ammunition, perhaps? It isn't even mentioned on the entire page. - Five Dog 20:34, 19 March 2009 (UTC)

Someone tacked a section on the bottom that contradicted everything said in the rest of the article. It was decently written, but it used a wildly incorrect definition of clip to argue against the distinction between clip and magazine. This is an educational article, not a debate forum. --Jackarunda 05:04, November 5, 2010 (UTC)

Oh thank God I'm not the only one who thought that was completely contradictory. I'd delete it, but I don't wanna piss off the admins or anything. --BizarroTedTurner 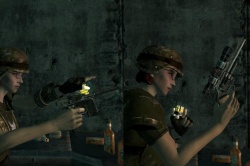 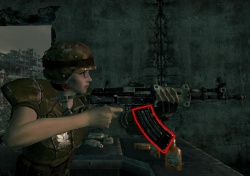 The 36-round box magazine of the Xuanlong Assault Rifle

Although completely irrelevant to the game, this section explains the terminology distinctions between a clip and a magazine to better help the reader distinguish between these two commonly misused terms.

A clip is a device used to load ammunition into a magazine (most commonly an internal magazine). Such devices include the 8-round "en bloc" clip used by the M1 Garand, and the stripper clips used by the SKS carbine (the 'sister' to the more common AK-47). However, many people confuse this with a magazine, which is a device that feeds ammunition -and- encloses it. These are, for example, the curved magazine of the AK-47, which military weapon amateurs call a "banana clip", or the magazine of the M16 rifle. A shortened term for magazine, "mag", is also available. It would be immensely incorrect to refer to anything that does not use clips or magazines as having a "clip size".

In Fallout 3, for example, the Chinese Pistol is loaded from the top by a stripper clip. It has an internal magazine that holds 10 cartridges. The Chinese Assault Rifle uses a 24-round (or 36, in the case of the Xuanlong Assault Rifle) box magazine, the so-called "banana clip" in slang, which is an incorrect term to use.

Energy weapons can be referred to as using cells rather than magazines, as they are a battery of sorts rather than dedicated storing and feeding devices.

This error can be easily seen in the G.E.C.K. where you can enter the magazine capacity of a weapon as "Clip rounds". The correct term would be "Magazine capacity" or "Mag capacity". Most likely, the developers just wanted to make it clearer as to what they are talking about as most people are more familiar with the "clip" usage.

In the Operation: Anchorage add-on, one of the Chinese soldiers will yell (with English subtitles) "Empty your clips! No survivors!" upon attack.

I originally took off Air as an ammunition, because the page for air had been deleted 2 different times, and one of the times was by Porter. It is linked to a page that doesn't exsist however, and my edit has been un-done and it is back on the list. Should we keep it on the list though? --Xa3

Well, I think it should be left up (obviously), for the reason that it was a legitimate ammunition in FOBOS. It's just a very unorthodox kind of ammunition. Kastera (talk) 16:14, July 1, 2011 (UTC)

But the page has been created and deleted twice already in the past. --Xa3