While it is listed as an unarmed weapon, wouldn't this still use ammunition and be classified as a firearm as well? I mean I can see the relation to it as it reminds me of the OSS pistol Glove seen here and would be something I guess you could carry into casino's besides a razor:

You'd have to hit them for it to work, because there has to be phsyical contact, and is a glove like weapon it is technacally unarmed.JaspertheViking :D? 11:06, September 26, 2010 (UTC)

Could a possable inspiration be the explosive punching thing from Blade 2? I don't know about you, but it was what I thought of as soon as I saw the name. --Grupa 'Zamamee 21:35, October 9, 2010 (UTC)

Wasn't one of these in Inglorious Bastards?

This thing is freaking awesome! I gave one to Boone because I saw him using a regular one earlier and decided this would be a nice present. The first time he hit someone, I nearly shit myself. That is the coolest unarmed weapon in the game! 173.87.3.146 07:09, October 27, 2010 (UTC)

It's classified as "unarmed" because it requires unarmed skills to use. It's still a firearm, but you don't point and shoot it like other firearms. It fires as a result of a punch, which is an unarmed trait. It should use ammo, but your character should also take a dump every now and then but doesn't. It's just a design decision the developers have made for whatever reasons. 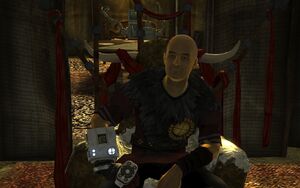 From what we have seen from the previews and what we know about this weapon, I'm guessing it's the displacer gloveCarter o51 15:55, October 17, 2010 (UTC)

Does using stat boosting equipment, like Power Armor, count as having the 9 Strength?

Yes. If you take a look at items in the Pip-Boy, the icons showing the Strength and Skill requirements for weapons will blink periodically if you don't meet them. If you do meet them, through aid items or otherwise, they'll stop blinking. Micharus 00:31, December 3, 2010 (UTC)

Is this a silent weapon like other unarmed and melee weapons, or will it alert nearby foes?

If its unarmed regardless of what kind of ability it does, if it is a hand(held) and your not seen De Accipitre Deserta 18:40, November 5, 2010 (UTC)

LOL, from what I have seen, all weapons are "silent" provided you one-shot your victim.

I easily obtained a ballistic fist quite early. In the weather station that leads to the secret bunker, where you get your weapons back, are three praetorian guards equipped with ballistic fist. I used a stealth-boy and attacked one. I didn't even one shot him, it took me a full four hits with spiked knuckles and a decent unarmed skill. I got the ballistic fist and used it to one shot the others while still stealthed. Anyone else done this or care to add it to the page? 67.191.183.14 22:44, November 9, 2010 (UTC)

DAMMIT! I missed the opportunity... now they leave me no choice but to slaughter the entirity of thy fort which art in my possesion Wertoret 21:06, November 11, 2010 (UTC)

The article currently says that it's possible to achieve a 53% critical chance with this weapon with the help of chems. Unless I'm mistaken, there are no chems that boost your critical chance, and this weapon's critical chance is only x1. Any objections to taking this out? 2.2 Dog 22:55, April 15, 2011 (UTC)

Several problems with that... 1. There are no chems that help (magazines aren't chems). 2. Ninja doesn't work as a straight 15% bonus without using a mod or the GECK to fix things, (as mentioned in the article you pointed me to, thus making it a max of 49.45%. 3. This weapon doesn't have any bonus to it's critical chance, so it's completely unremarkable. It's like saying "You can cause more damage with this weapon if you score a critical hit." What's the point of mentioning it? Especially when, as you point out, there is another page that deals with this information... correctly.

Really hoping to get a unique one in upcoming DLC's, melee weapons have OH Baby!, Explosives have Mercy, Guns have CZ75 Avenger, and energy weapons have the YCS/186, give as a good unique unarmed weapon (i don't count pushy because a regular ballistic fist could dominate it).Tozzler 08:26, May 23, 2011 (UTC)

Should this weapon use shotgun shells?

True, but it doesn't.