I found two of these in a crate at the rocket test site, fully repaired. The crate was in a big pile of crates with the ghoul who was holding out against the nightkin. Someone else want to give it a try? It was on PC. My luck was 10 with scrounger and fortune finder, if that matters.

Complete BS, there is only a single version of this weapon in the game.

Inferior to Sawed Off Shotgun

Is it just me or is this unique version of the Sawed Off Shotgun inferior to the normal version. The normal version does more damage, and can be used as a hold out weapon. While the unique does a very minor amount more critical damage, and uses slightly (insignifigantly?) less AP (35 vs 37). Is there some other big difference I am missing, such as spread?--75.72.124.142 03:12, December 6, 2010 (UTC)

I would say you are missing a lot, apart from not being a hold out weapon, it is superior in every other aspect. Oh and a FYI, that very minor amount more critical you was talking about, is per-pellet. So that would actually be an additional 28 damage if all pellets where to crit e.g. sneak attack.

2 versions of the skin

Is it worth mentioning in the main page that this gun once has a different skin at one point in development? --Omolong 19:40, December 7, 2010 (UTC)

Where is the source of this information. 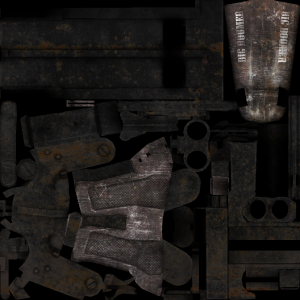 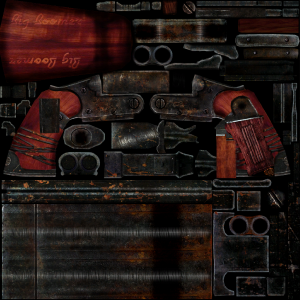 The unused texture is based on the mesh used in Fallout 3 and not NV's, but for some reason the texture doesn't show up on the FO3 shotgun's handle if you reskin it. - Cannibalbrane 04:32, April 4, 2011 (UTC)

Nice find, I have added it and a retextured FO3 model picture. On a side note, the hand grip texture you are looking at doesn't show because that was also removed from the model of the FO3 version also, just take a look at the FO3 texture to see what I mean.

Tip on Getting it off Lady G

Here is a tip on getting the boomer with out having to kill Lady Gibson. (Yeah I have Karma Issues)First, make sure companions wait for you near the scrapyard but far enough away where they will not attack Lady G. or other enemies. Ok what you want to do is get Lady G. to draw the weapon but not on you. How? Wander into the dry lake bed and get the attention of some baddies, either raiders or fire ants. Then coax them all the way back to Lady G. (Make sure you do this during the day while Lady G. is sitting outside) As the baddies get closer she will draw. HERE is your chance! Disarm her with a shot to her shooting arm, she will drop boomer, HOLSTER WEAPON IMMEDIATELY. Dogs will then turn their attention to baddies and you can run and pick up Boomer. Viola, just a flesh wound on Lady G. and a rare weapon for the collector in you. Enjoy.--TXSTORO 05:03, December 17, 2010 (UTC)

Thank you, tried to get this for a few hours and finally got it. If you shoot Lady G more than once, just run off and use a stealth boy and vanish. She'll forget all about it in 3 mins or so. Better to do this on a harder mode, like Hard or Very hard so she doesn't die. Rebel AE June '11

This was posted earlier on here:

this is completly idiotic. I have pickpocketed this weapon from her several times (on xbox 360) with a sneak less than 30. Just because one person hasn't had the best of luck, does not mean it is impossible.

I seriously doubt that, with a 30 sneak skill you would have a hard time pick pocketing Sarah in vault 21, and shes about the easiest person in the game to pickpocket.

Has anyone managed to pick pocket this gun from her? I have literally spent the last 2 hours trying with no luck. My sneak is currently 86, so I tried the Chinese stealth armor, then I tried adding a sneak magazine to that, then I tried a stealth boy on top of that. I tried both when she was asleep and awake. I tried killing all her dogs to see if they were what was getting me caught. I raised my luck to 10 with the lucky shades and naughty nightwear, used a sneak mag and stealth boy. Again, no success. Anyone actually managed this through pick pocketing and if so how? (and yes, I gave her a hunting shotgun first so she would unequip this gun.)

BTW, I did finally manage to get it by punching her so she would attack, then I had to shoot the hunting shotgun from her hands so she would switch back to Big Boomer, then I shot that out of her hands, then she chased me so I had to use a stealth boy to hide from her because I didn’t want her getting lost or killed out in the wasteland. ReapTheChaos 20:59, May 28, 2011 (UTC)

As said above I also just gave her a punch and the moment she pulled out the gun i pulled out my colt .45 and lined a shot on the boomer in vats. she dropped it and I grabbed it and ran out of there to crouch and pop a stealthboy soon to be forgotten. LouisianaBob 00:03, September 15, 2011 (UTC)

Why are there no Notes on this page? The reverse pickpocketing and the provoking should both be under notes right? Rebel AE June '11

What would the damage be if you fired this with magnum ammo while sneaking and all the pellets hit on a target with no DT? I have a feeling that this gun would be good for a point blank sneak crit outside of vats if you have shotgun surgeon --24.72.4.212 22:43, August 30, 2011 (UTC)