Got any questions about the videos? Or maybe having some problems viewing them?
Ask questions and report problems to my discussion page: CryonBrion (Talk)
If it's not on my talk page, I might miss it!

Quite possibly the most awesome to be encountered throughout the entire game, next to Vengeance. Harry Callahan would weep with joy.

I was basically bored of the scope so i used the G.E.C.K to remove the scope,its pretty fun to use now,mainly because of the better screenshots i can make

You can grab these at any time. Well, technically, you have access to Vault 92 at any time, but that's just excessive note making. I generally get my first one before ever venturing far from Megaton over at the elementary school, a long time away from the Blackhawk. --DarkJeff 17:15, 18 December 2008 (UTC)

I don't really see how the 5 more points make a difference. The Repeater is going to kill anything you headshot anyway, especially since its low spread lets you snipe just as well as with the Blackhawk. The only normal enemy that will survive a sneak attack headshot on normal is a Deathclaw, and that is with extremely few HP left. You can easily finish it of with any weapon or with the help of a companion. And since Hunting Rifles are far, far more common than Scoped .44 Magnums, in addition to the difference in weapon HP, the difference in attack power is almost negligible. Even though I hoard every Magnum like it was made out of gold and regularly visit any shop that carries them, they remain fairly elusive. Hunting Rifles are carried by almost every faction out there, meaning you're more likely to keep the Repeater in perfect condition than to have it lose more than one point of damage. They're both two of the best weapons in the game, easily, but there is definitely not a best one out of the Blackhawk and Lincoln's Repeater.--Mehbah 16:58, 27 February 2009 (UTC)

Unqualified comments like 'energy weapons suck' are simply not usefull. Why is everybody so obsessed with the idea of THE best weapon. One of the most interesting elements of this game is, that there is none. The usefullness of a weapon depends on the situation. I use VATS a lot, so Repeater > Blackhawk, but it is the other way round in ego-mode.

It's important to keep opinion sections to the 'Discussion' pages, good move. And to address your comments, competition is the nature of life. It's not just a part of human nature, it's part of the wild we were born into long before we came down out of the trees. ;)

It should be noted that whether you choose Commando or Gunslinger affects how well the Blackhawk will work. Given that there are a plethora of high-power two-handed weapons, particularly in mid-late game, with less AP cost per VATS firing, I'd take Lincoln's Repeater more often out of sheer practicality with the Commando perk.

I use the Laser Rifle. Not the Wazer Wifle. Not the Gatling Laser. The Laser Rifle. I'm not obsessed over which weapon kills my enemy the fastest. If I want to do that then I just use "kill" in the console. Not being the absolute frickin' best makes the game fun. PlasmaFox 03:01, 26 January 2009 (UTC) 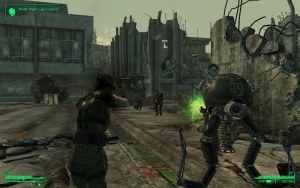 You know what else makes the game fun? Muttering "Do ya feel lucky, punk?" right before shooting raiders in heart ;)

Nothing like a fresh breath of propaganda. Between him and the Prototype Medic Power Armor it can start sounding like G.I. Joe's Sergent Savage moved into your brain...

I completely forgot about that armour! I should go grab that sometime, but I -love- how the Ranger Battle Armor looks on my character.PlasmaFox 03:19, 26 January 2009 (UTC)

Hey, I'm not sure if this is just because I have one-hundred in my Small Guns skill, but on my game it says the Blackhawk's damage is fifty-eight, not fifty-five as it says here in the article. I just received the Blackhawk from Agatha, and it's in perfect condition. I was wondering if fifty-eight is the actual in-game damage, or if it's just because I maxed out Small Guns. ~~Takoto 14:44, 29 May 2009 (UTC)

ur so wrong the strongest weapon is obviousely the mirv. 1 shot of that pwns 8 shots of the black hawk and lincols repeater with the best perks and all the stats.

For some reason I can't make a head shot in VATS with this weapon, ever. My 360 freezes each time... Does anyone else have this issue and know how to fix it? I've invested so many perks to my best character so that head shots are effectively one shot kills. It would suck if I can't completely own with VATS and this weapon because other than this issue the weapon is the second best small gun to the Lincoln Repeater which is AWESOME!!!

I recently made a character and decided to forgo getting commando altogether and limit myself to gunslinger and pistols and it's the most fun character I've had so far. It may have something to do with me also trying out unarmed for the first time as well. Blackhawk + deathclaw gauntlet = most badass character in the game. I also use sydney's ultra smg and the dart gun but honestly I only use the dart gun when I'm sneaking and I barely touch the smg anymore since the blackhawk is so much more fun.75.138.195.167 06:37, 3 July 2009 (UTC)

glad that worked out for you at least, whenever i try to give charon a weapon that uses 44 ammo he burns through it insanely quick, lol--Toolazytomakeaaccount 01:18, October 8, 2010 (UTC)

No scope when obtained

i think the damage value must stay at 55 . cause it changes with other additions but still in wikia we always right the original value with only the skill is 100 on regarding weapon . cause of course the values are varrying every time with lots of changes --Replikanxxl 12:08, October 18, 2009 (UTC)