From The Vault - Fallout Wiki
(Redirected from Talk:Disintegrator)
Jump to: navigation, search

Anyone played Destroy All Humans? Maybe the weapon will be like the same-titled weapon in that game. Gabriel Cortez 00:18, 20 June 2009 (UTC)

Anyone else think this will be a rifle version of the alien blaster?

How is it Mothership Zeta when I just got done with Point Lookout, and I have it sitting in my Tenpenny Tower Suite?

No? Dismember is an axe? And Disintegrator is a Gatling Laser? You get it inside of the light house during the last main quest of Point Lookout.

For everybody thinking Mothership Zeta's going to be impossible to play, I have a sinking feeling Bethesda's going to bring us a travesty similar to the Steel Saw. Just a prediction.

Anyhow, for the Disintegrator, the interview that brought us its name also said it was a rifle. After that: pics or it didn't happen.

Well, I'll see if it does it again on another character. But when I picked it up, it said "Distengrator", so I thought "Oh, unique gating laser?" and took it. If it does happen, I'll post some pictures of it.

I scoured the Lab for hours, I found 2 Gatling lasers, but nothing called the Desintegrator. Maybe you're thinking of the Microwave Emitter, but I seriously doubt that. SplittingTheAtom 21:45, 26 June 2009 (UTC)

Let me get this straight. If there was any sort of unique Gatling Laser, this site would have had it up within 1 day after PL's release. You're bullshitting us, whether you realize it or not.Coodude26 02:45, 15 July 2009 (UTC)

Right,also,this disintegrator will probably be a fuckign rip-off of the destroy all humans weapon. Mr.Wolf 17:30, 8 July 2009 (UTC)

I have an odd feeling its going to be a reskinned railway rifle, with a different ammo type and fire rate.--Bayonetta 17:35, 8 July 2009 (UTC)

Can we get a protect on this article please? A lot of vandal kids have been screwing with it lately WouldYouKindly 04:54, 11 July 2009 (UTC)

Ok, THIS is an M1 Garand, and THIS is the disintegrator. The Dis. looks very similar to the Garand because the shapes are pretty much the same, and judging by the blue power source, I'm guessing the alien weapon even reloads from the same place as the Garand. --Clean Up 00:40, 15 July 2009 (UTC)

It looks nothing like an m1 garand. I own one and if anything it looks like a machine gun with a muzzle compensator on the front. Just because the energy cell is there doesnt make it a garand copy. Do you know how many rifles load there. All of mine do. My m1 garand, my mausers, my mosin nagants, etc. Need I saw more?--Kingclyde 00:44, 15 July 2009 (UTC) 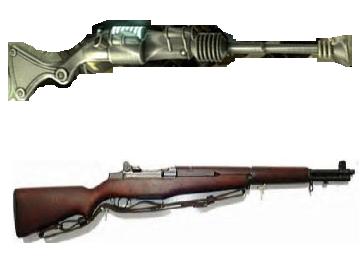 It has a stereotypical rifle shape that has just been "Alianized"(based on the alien blaster, which is why the barrel looks like that). And the reason I said it's probably based off an M1 Garand was because Mosin Negants and Mausers are bolt-action, and other semi-automatic rifles like the Gewehr and M14 were loaded from the bottom (or look off from the rifle). Really, how are you not seeing this? --Clean Up 01:13, 15 July 2009 (UTC)

I can see it, but it could look like a billion different rifles. just having a lowered stock and a slim frame does NOT make it look like an M1. Maybe if it was brown, was bolt-action, and shot bulklets, then I'd agree. But this is just supposed to be a regular-looking rifle. You could say that it looks like every rifle in existence, but it doesn't change the fact that it's completely pointless to point out, considering none of us have even used it yet.Coodude26 02:41, 15 July 2009 (UTC)

Well I pointed it out because the weapon completely reminds me of the Garand every time I see it (the Garand is semi-auto BTW, not bolt-action), but at this point I'm guessing it's just me. --Clean Up 20:57, 15 July 2009 (UTC)

I think it looks like an early long barrel blunderbuss made of space age stainless and LEDs. Especially since this was a common theme for 50's SciFi alien weaponry. Axier 14:42, February 23, 2010 (UTC)
Just saying, but why would a highly intelligent extra-terrestrial race base one of their complex weapons around a crude weapon like ours?

Whoever keeps putting that it runs on APC's just stop doing it. NOBODY KNOWS what it runs on yet. We'll have to wait and see. It could be anything SplittingTheAtom 13:52, 31 July 2009 (UTC)

Are you sure the "jam" animation is incorrect? Cuz the weapon makes a distinct sound, like powering up the flashlight of a camera or something. Also, when reloading the Destabilizer I cant see myself actually removing something from the weapon and what I seem to be putting back in seems "dislocated" from the holes in the weapon where a Module might be. Just my 2 cents. --Radnus 81.205.186.16 18:05, 4 August 2009 (UTC)

Actually, it seems that both of the reload animations are screwy. The Disintegrator uses its own jam animation for reloading, and the Destabilizer uses the Enclave Plasma Pistol's reload. I think they were intended to use something like the AER9 Laser Rifle's, where the Module is actually removed. Nitty 22:17, 9 August 2009 (UTC)

Since both the Disintegrator and the Destabilizer have the incorrect reload animation, can someone on the PC version use the G.E.C.K. to see what the reload animation should be. I assume that the correct one should be in the G.E.C.K. but that it is just not attributed to the guns properly. Insincerity 03:13, October 6, 2009 (UTC)

I don't know about you guys, but there have been several instances where I've seen the DMG value for the Disintegrator drop for an unknown reason. I don't remember the reduced value for DMG at the moment, however it had dropped at least 5 pts. Initially I had chalked it up to side effect from the biogel, but after checking my status in the pipboy I could see no such condition afflicting me (I didn't notice a drop in DMG with the Atomizer or other energy-based weapons, but I could have glossed over it). I'm not sure if anyone else is experiencing fluctuating damage values, but if so, do you think it's the weapon itself or simply a status effect that goes un-indicated in the status tab?--DashMan54 13:31, 5 August 2009 (UTC)

I sometimes get this, with all weapons, when I'm putting them away into a locker in my Megaton house. I think the game ignores one of your Point Lookout damage increasing perks temporarily. When you back out, it should be fine. Sometimes my 10 mm Submachine guns only do 60 instead of 90, as if one of my PL perks wasn't there anymore. ~Unholy

yeah sometimes I fire it and the shots hit but do no damage, OR the just go straight through. Does this happen on other consoles or just my Xbox 360?

I'm trying to make the ballistic fist in New Vegas at last a little more realistic, and would like to know what reload animation this uses in Geck, as the New Vegas files for it are basically just the textures and model. 97.113.61.3 20:40, 23 June 2012 (UTC)