He is seen later in the trailer fighting the Courier. 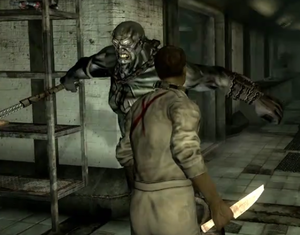 I just did some crafty youtube pausing, and the Nightkin attacking the Courier definitely has the 'DOG' scars (see pic). Maybe there are more Nightkin in Sierra Madre, and maybe they all have 'DOG' scars because they were all captured, branded and locked up (maybe kept as pets?)

It's unlikely but it would make more sense than 'Dog and God' attacking the courier because of course 'If one of you dies..... you all die'. Maybe he goes crazed every now and then and you have to run away from him. Itsjustliam 12:24, December 20, 2010 (UTC)

Also,why is the nightkin or dog/god not wearing an explosive collar?

I'm pretty sure he is wearing one, check the pic again and his version is a big thick chain with the explosive bit slightly visable at the back, pretty sure a normal slave collar wouldn't fit him properly Itsjustliam 11:00, December 21, 2010 (UTC)

Thanks. We didn't know about the split personality bit when I posted that. Also, nice work with that shot.JaspertheViking :D? 11:13, December 21, 2010 (UTC)

Right, so as we think that thenightkin that fights the courier later in the trailer is Dog/God then can we assume tha he uses a rebar club as a weapon? Because he's seen using it to attack you. I'm going to add it.JaspertheViking :D? 11:41, December 20, 2010 (UTC)

Every single Nightkin was hand-picked by the Master out of Mariposa supermutants. http://images1.wikia.nocookie.net/fallout/images/0/08/Personal_Sig_Image.gif Tagaziel (call!) 23:14, December 20, 2010 (UTC)

Possible reference to the play "Short Eyes"-one of the characters frequently talks about god as a fickle being, flipping the name to show a more babraric and nonesensical side of it, etc. Wyrmalla 18:33, December 20, 2010 (UTC)

God as fickle is a staple of literature, far before and beyond "Short Eyes." Also, dog/god used satirically is pretty widespread.--Gothemasticator 01:46, December 21, 2010 (UTC)

I've edited some parts of the article to take away some confusion of having two characters in one character page. I refer to him as D/G and one individual (Because he is, essentially). Aonopolis 20:43, December 21, 2010 (UTC)

I played DM and was thinking the entire time that they are two completely different people. Dog is still listening to The Master (super mutant army guy), while God is trying to kill Elijah for controlling Dog. I think it should be split into to articles. --Drldrl 23:33, December 21, 2010 (UTC)

Dog and God are in the same body, but his mind switch's from one mental stat to another, so counting them separate characters is like counting Hanna Montanan and Mily Cirus two different people.--The OutCasts 12:16, December 25, 2010 (UTC)

Well, you know how you can select the three companion's collars as radios? Well so long as Dog isn't with you at the time you'll hear variations of "Hope the voice doesn't come back"/"want to go back" etc but I noticed that SPOILER even if you convince Dog and God to merge into one sane person that doesn't remember you beyond a feeling of gratitude, listening to the radio for his collar will still be the usual Dog randomly talking to himself. --Lyco499 23:37, December 22, 2010 (UTC)

All of the female nightkins wear some chest covering, so obsidian doesn't get any nude complains, so he's a dude.

BUT they were humans before, watch lily, she was a grandma and she wears chest covering, even tough she doesn't looks femenine, tabitha is another example, also mariposa mutants keep their sexual organs intact so... he's definitely male.

Anyone think the OM NOM NOM NOM easter egg is a refrence to heavy in TF2?

What? More TF2 heavy references? Nope. Om nom nom was the sound cookie monster made when he devoured a cookie. It has since been used in near everything. It is simply a sound effect. KaisarDragon 13:46, January 1, 2011 (UTC)

Well, since it has been used in near everything, it becomes more than a simple sound effect, see ? plus, the sound can only be heard with the wild wasteland trait, so, it IS a reference. But more a reference to the general meme than to TF2, imo--WikiSidd 02:53, January 12, 2011 (UTC)

You misunderstand. I just said it is the sound cookie monster made when he ate a cookie. That IS the reference. The fact that it is a sound effect has it being used in near everything involving devouring of food. Cookie Monster started Om Nom Nom worldwide well before the internet. KaisarDragon 20:36, January 12, 2011 (UTC)

He just said "Wish I had a stealth boy instead of this beartrap." when i went into the sneak stance. I had given him a beartrap fist weapon and he was God at that moment. Can anyone confirm this? I already added it to notable quotes in the article btw. --BlitzKrieg-BoB 16:02, February 27, 2011 (UTC)

Ah yes, Dog just told me he put a bear trap there to keep the voice away. Upon closer examination of his arm i noticed the beartrap underneath the metal chains. Im pretty sure that is what he was talking about now, but thank you for replying anyways. I still think I am gonna leave the comment in notable quotes since he has said that line like 3 times now. --77.171.8.164 16:06, February 28, 2011 (UTC)

i'm five minutes into the DLC and his spamming chat is going to make me have a split personality disorder soon.

I've encountered what appears to be a bug where I cannot open dialog options with him as either Dog or God, any attempt to do so ends with Dog asking to be let out of his cage, even when God is active. All of the other companion options work just fine, but as a result I cannot fire him for any of the others. Has anyone else had this problem? 24.161.174.219 08:17, May 23, 2011 (UTC) Does anybody else know a way of fixing the bug where Dog/God will listen to the recording, I played the recording and he won't talk to me, I have deleted the content "Dead Money" and have re-downloaded it but I still can't get him to talk, this is driving me insane, any help would be good.

Clearing the Cache on an Xbox 360 does'nt make it work, deleting the title patch does'nt work either, and neither does re-downloading everything. I have had this same problem too and posted this just to save confusion. If somone knows a way to fix this please post in detail. Thanks. --Chase Christopher Coleman 09:54, June 18, 2011 (UTC)

Some personality disorders are less two people and more the fracturing of one. Treatment can fuse these two beings back together. I'm not sure if I'm correct, but I believe that the "new voice" Dog/God gets is acutally this. Dog and God coming together to be whoever they were before the illness.--Grassrunnerdaugher 17:01, June 6, 2011 (UTC)

On the back cover of All Roads below two men on the roof, there's graffiti on the building that says "GAWD" and then "DOG" right below it. Anyone else think maybe this is a reference to him/the two? -Ganondorf 01:42, June 21, 2011 (UTC)

This has to be the first video game I've ever played where one of the main characters was a cutter. If you get the best ending and reintegrate his personality, he even gets a bit emo at the end. Wunengzi 06:05, August 12, 2011 (UTC)

I haven't played Dead Money fully yet but do their exist any weapons in the DLC that I can actively give to him? I've preferred to keep him in his "God" state and wish to try and give him a better weapon to remedy his lack of combat skills but I'm unsure what their exists in the DLC that I could give to him. Could anyone provide a list or just a notion of what weapons can be found in the DLC? Draco122 14:58, August 25, 2011 (UTC)

The list of unique weapons is on the Dead Money page. I don't know why there is such a long list of implied weapons he can use in the Inventory section, since the frag grenade and sledgehammer were the only ones on that list I found in the DLC. GRPeng 03:52, October 28, 2011 (UTC)

I'm playing through Dead Money right now for the first time (I know, I know) and I can't get over how completely and utterly annoying this character is. He will not stop talking. It wouldn't be so bad if he'd had more than, what, three lines recorded? Is there any way to stop his incessant babbling, or is it something I've got to deal with? 24.144.139.46 09:35, 5 July 2013 (UTC)